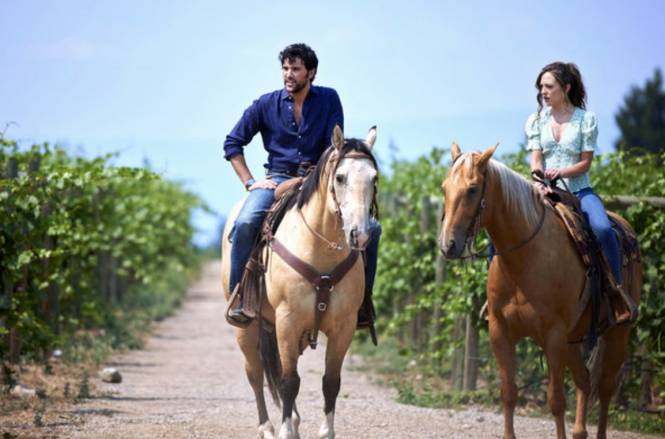 Since growing up on her late grandmother’s vineyard, Jenna Savern (Osnes) has dreamed of becoming a Master Sommelier. Determined to join her role model Jennifer Huether as one of the few women to pass the notoriously difficult exam – despite having failed her previous two attempts and with little support from her restauranteur boyfriend – Jenna takes any opportunity she can to study. When she’s called back to the family vineyard to help her father (Eric Keenleyside, “Superman and Lois”) throw a surprise anniversary party, she sees it as the perfect chance to get away and focus.

While there, Jenna meets the vineyard’s handsome new head winemaker Marcelo (Di Pace), who has successfully turned around small vineyards all over the world using natural methods he learned growing up in Argentina. Marcelo soon has Jenna looking at wine, and her long-held dreams, in a new way. As exam day approaches and Marcelo is offered a job that would take him halfway around the world, she learns that sometimes the best pairing is the one you never expected.

Raise a Glass to Love is from Glee Road Productions Ltd. Antonio Cupo is executive producer. Charles Cooper is producer and Allen Lewis and Bianca Versteeg are supervising producers. David Weaver directed from a script by Emily Claire Schmitt.