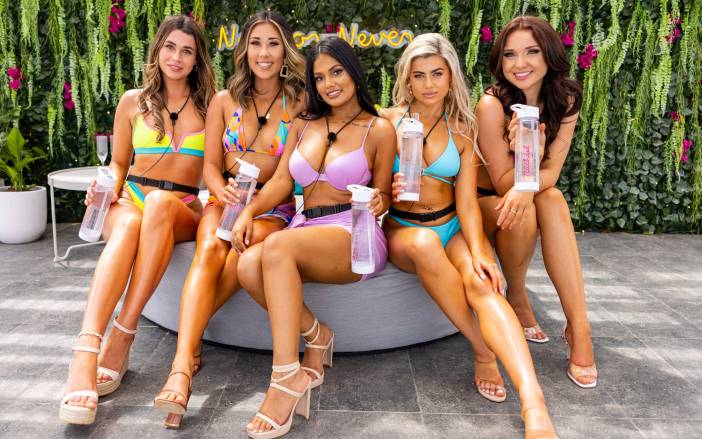 Where a group of beautiful single Australians take six weeks off to find love the old-fashioned way… in a reality show.

The girls: RACHAEL, JESS, ARI, and COURTNEY all arrive in the villa and pop a bottle of champagne by the pool.

Host, SOPHIE MONK comes into the villa and chats to the girls and asks what they’re looking for by coming on Love Island. The girls line up by the pool to couple up, as AARON becomes the first male to strut into the villa.

Aaron immediately catches the eye of COURTNEY. She steps forward and they become our first couple on Love Island Australia.

Next is TAKU who makes a great impression with his confidence, smile, and scent!
ARI is not wasting time stepping forward for 3 guys. TAKU (who she refers to as Daddy) first, then later RONNI and RYAN.

Love Island has its second couple, TAKU and ARI.

Next up is RONNI who walks into the villa saying:

TINA and ARI step forward for RONNI. He chooses to couple up with TINA saying:

“…you look even better close up.”

Next to enter the villa is JORDAN who draws sighs from all the girls. He says:

“I’ve never been in love before, but I definitely know what in lust is.”

Both JESS and RACHAEL step forward for JORDAN, He chooses to couple up with JESS, making them Love Island’s fourth couple.

Last into the villa is RYAN who says:

“I don’t really use one liners, I just lock eyes and it’s on.”

There we have it, the first five couples of Love Island Australia, Season 3 are:

In their couples, they will live together, take part in challenges together, and share a bed together too. They do not want to be single. Being in a couple gives them a stronger chance of staying in the villa.

The biggest prize on offer is love, but as a bonus, the couple Australia loves the most will also take home $50,000.

After the coupling up ceremony, the Islanders do a tour of the Villa and love what they see! The couples break off and get to know each other with ARI & RYAN ending their chat with a kiss!

RACHAEL & TAKU find common ground despite not initially choosing each other, AARON & COURTNEY have good banter, JORDAN & JESS have a mutual attraction, but JESS is not convinced he is here for the right reasons – due to his comment about loyalty.

RONNI is quite the Casanova complementing TINA’s beautiful features and they are ‘vibing.’

A game of Never Have I Ever sees lots of truths spilled and causes a rift between AARON & COURTNEY as he picked JESS as the most attractive.

The graft is on with ARI telling TAKU she would be happy if they were coupled up, AARON telling TINA that he wants to chat to everyone; COURTNEY speaking to RONNI, and JESS going from telling JORDAN she wants to get to know other people and doesn’t believe he is here for the right reasons to thinking he is a poor misunderstood man and telling ARI she thinks she may kiss him in bed tonight.

TINA ping pongs between RONNI & AARON all night.The Islanders go to bed with JESS & JORDAN finishing their night with a passionate kiss in bed.

The drama officially kicks off with JORDAN and RACHAEL stealing a kiss and JESS realises she is looking for something more genuine than that.

During the evening party TAKU gets a text informing of an imminent bomb arrival… Enter LEXY who says that on initial impressions AARON and RYAN have caught her eye!

LEXY gets a text saying she will be choosing a boy to couple up within 24 hours – ARI is nervous and tells AARON she is sure LEXY will choose RYAN, leaving her single.

LEXY isn’t sure who she likes and needs tomorrow to get to know them all more. JORDAN spends the night in the limbo land bed leaving JESS in her bed alone.