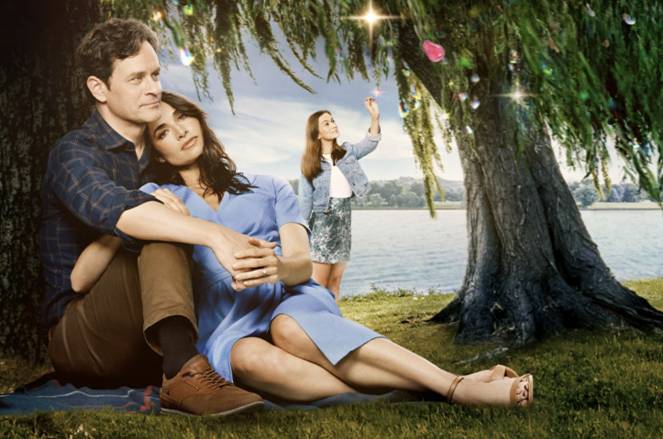 Tom Everett Scott (That Thing You Do!, “13 Reasons Why”), Mía Maestro (“The Strain”) and Ella Ballentine (The Dark and the Wicked) star in the new original drama, “Rise and Shine, Benedict Stone,” based on the novel written by Phaedra Patrick, premiering Sunday, September, 26 (9 p.m. ET/PT), on Hallmark Movies & Mysteries.

Benedict Stone (Scott) and his wife, Emilia (Maestro) have separated after 10 years of trying for a baby. Benedict wants Emilia back, but Emilia needs space to figure out what she needs. So, when Benedict’s teenage niece Gemma (Ballentine) mysteriously arrives on his
doorstep his life is turned upside down. Benedict and his brother have been estranged for two decades but Gemma assures him her dad knows she’s there. When Gemma finds out that Benedict and Emilia are separated, she makes it her mission to get them back together.

Love conquers all, doesn’t it?

“Rise and Shine, Benedict Stone” is from Crown Media Productions, LLC. Nancy Bennett is executive producer. Charles Cooper is producer. Peter Benson directed from a script by Melissa Salmons based on the novel of the same name, by Phaedra Patrick. The novel is published by HQ in the UK and Park Row Books in the United States – both publishers are part of HarperCollins.

The film rights were optioned through Sheila David of the Darley Anderson Literary, TV and Film Agency.