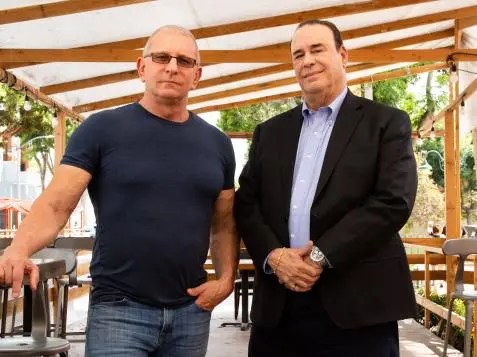 Robert Irvine and Jon Taffer are the best at turning around the fortunes of failing businesses in the restaurant and hospitality industry. Saving hundreds of locations throughout their careers, they have seen it all, from terrible food and unappealing restaurant décor to combative owners. Now, these larger-than-life personalities face off for the first time in the new three-episode series Restaurant Rivals: Irvine vs. Taffer, with all episodes available to stream on Thursday, March 3rd on discovery+.

Robert Irvine is a highly acclaimed chef with a model that has always put food first with the belief that if the menu is amazing, the people will come. Jon Taffer is a businessman who believes it is all about creating an overall dining experience that makes for a successful restaurant. In each hour-long episode of Restaurant Rivals, Jon and Robert put their guiding principles to the test, using their trademark combination of tough love and sharp business acumen to help a pair of struggling restaurant owners back to profitability. With the flip of a coin, Robert and Jon pick which restaurant they will makeover.

Their mission: create a new menu and make improvements to the restaurant and staff within 24 hours before a head-to-head dining service determines the winner. Each restaurant is judged on select criteria by a group of guests dining at both establishments, including quality of food, atmosphere, and service. With bragging rights on the line, Jon and Robert pull out all the stops to determine who is the top dog to earn the ultimate victory at the end of the third episode.

“Fans have been waiting for this show,” said Irvine. “But more than that, Jon and I have been waiting for this show because we both love helping people in this industry who are struggling. To turn that love into a friendly but fierce competition is a no-brainer. The fans benefit. The establishments benefit. And Jon and I get to have an amazing time. I’m thrilled to see this finally come together.”

Added Taffer, “For years our fans have wanted Robert and I to do something together. I have tremendous respect for Chef Irvine, and I think he would say the same about me; our ultimate goal is to see these restaurants and their owners succeed. At the end of the day, that is what motivates us to do what we do. But make no mistake, I take this challenge very seriously and I expect to win. Good luck to Robert… he’s going to need it!”

“Robert Irvine and Jon Taffer are the absolute best at what they do, helping restaurants and small businesses on a path to success. And with Restaurant: Impossible continuing to be a fan-favorite on Food Network, up double digits in key benchmarks and recently having its highest-rated premiere since June of 2020, the timing could not be more perfect to give audiences want they want with Robert and Jon battling against each other for the first time on Restaurant Rivals, in a competition like no other for discovery+ viewers. This is a true Goliath vs. Goliath story, but only one titan can win the day,” said Courtney White, President, Food Network and Streaming Food Content, Discovery Inc.

Get Robert and Jon’s top tips for opening and running a successful restaurant, learn more about some of their favorite and most memorable meals, and follow along with the rivalry on social media using #RestaurantRivals.

Restaurant Rivals: Irvine vs. Taffer is produced by The Intellectual Property Corporation (IPC), an Industrial Media company for discovery+.