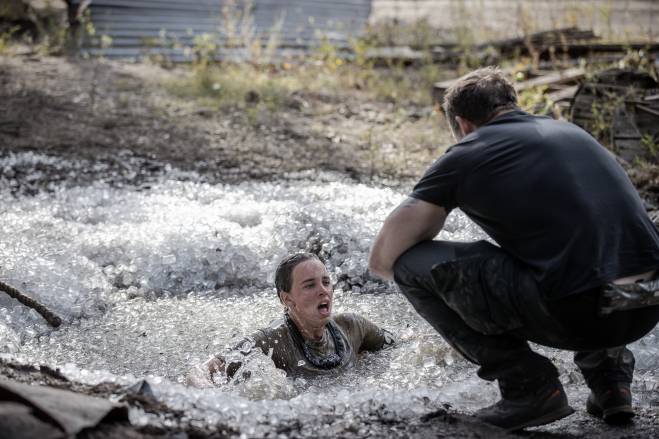 Last night on SAS Australia, the 12 remaining celebrity recruits reached the halfway point of the course and faced a lesson in mindset.

They discovering what differentiates an elite soldier from a bully with a weapon.

Armed with an assault rifle, recruits advanced through unsecured territory, tasked with eliminating hostiles on a hostage rescue mission, a kill or be killed scenario in which the female recruits excelled.

After a dismal performance and inability to focus, AFL star Heath Shaw was brought in for questioning, where he explained to the DS how his ADD has impacted his life and prevented him from taking in detail.

“I’m a perfectionist and I expect that from everyone around me as well. You can find excuses with a team but a lot of the stuff I’ve f*cked up here is individual.”

Bra Boy Koby Abberton was made Duty Recruit, but his attempts to rally the troops only resulted in confusion.

Recruits then faced an extreme test of clarity of mind, as they submerged their bodies in a freezing pit of ice. Mark Philippoussis teetered on the edge of hypothermia, while Jessica Peris was frozen with fear.

Kerri Pottharst passed the icy task, but her aging body finally let her down and she handed in her number.

“We all have so much more in us, so much more. I never thought I’d be able to do any of things we were able to do here and I’m so grateful that I had the opportunity to really challenge myself to the end.”

Bonnie Anderson, who had been struggling all day with another task failure, was starting to unravel, and despite encouragement to stay from her fellow recruits, Bonnie decided to VW:

“I feel like I’ve pushed myself beyond my limits, I’ve given everything that I’ve got.

“My emotions are really to that point where I feel that I’ve broken. I’m proud, I can walk out of here with a lot of lessons, it’s been cool.”

Monday 7.30pm, recruits face a terrifying test of fear down a 90 metre cliff-face and as Bra Boy Koby Abberton comes clean, Dan Ewing is brought back to earth.

On 7plus you can find uncensored episodes, deleted scenes, extended interrogations and exit calls.

SAS AUSTRALIA – Monday-Wednesday 7.30pm on Channel 7 and 7plus.