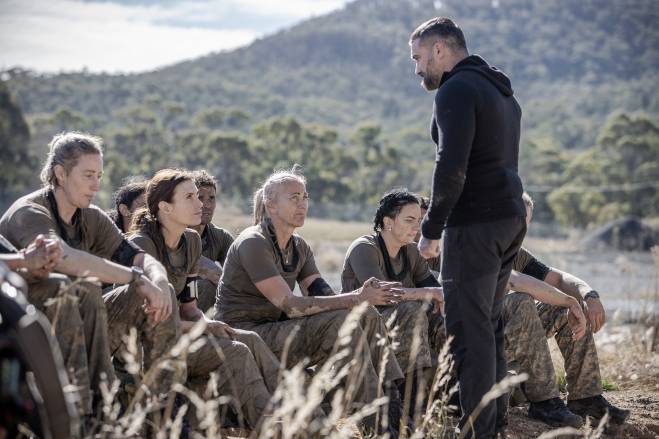 While some recruits smashed the task, others struggled with the daunting traverse, including #10 Erin Holland, who was brought in for questioning by the DS.

An emotional Holland revealed a tough 2020, including a break-in while she was home alone sleeping, which had left her feeling vulnerable and lacking in confidence.

Later, during torturous combat drills designed to deplete them, Holland was pushed to her physical limits and buckled under the intense DS pressure, becoming the second recruit to VW.

Recruits then attempted a claustrophobic crawl through a 25 metre underground wormhole, with recruit #16 Sam Burgess taking more than 40 minutes to complete the horrifying task.

DS Ollie and Billy questioned recruit #1, former Labor MP Emma Husar, in the Mirror Room, where she revealed being thrown under the bus – and out of parliament – over things she hadn’t done. The subsequent trial by media cost her everything and left her with severe depression and acute anxiety.

“The news events this year about Canberra have made me want to reach for the bucket. We’ve seen multiple men behaving badly, with evidence that they are all actually doing the wrong thing, and they are treating that place like a boys’ club.

“For anybody that wants to say women’s advancement’s done and we’ve got everything we need, they’re dead wrong. They’ll just find new ways to keep us marginalised and on the side. I just wish I would have had more courage and I would have said enough is enough way back then.”

The 16 recruits still on course in the hope of passing SAS selection are:

Tomorrow 7.30pm, a gruelling physical assault course traps a cheat; a harrowing ‘Death by Drowning’ exercise claims a big scalp; and Jessica Peris makes a devastating admission. Go to 7plus where you can find uncensored episodes, deleted scenes, extended interrogations and exit calls.

SAS Australia – Monday-Wednesday 7.30pm on Channel 7 and 7plus.