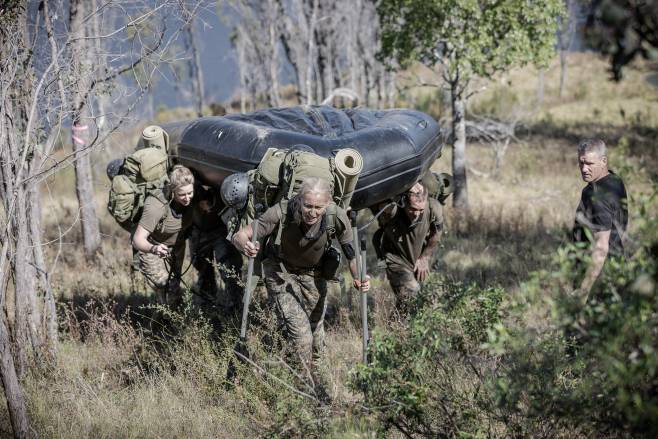 Tonight on SAS Australia, the 12 remaining star recruits were asked to nominate the weakest among the group.

They unanimously voted it was Kerri Pottharst – the oldest recruit on the course at 55.

When it came to Kerri’s turn, she nominated Bonnie Anderson as the weakest recruit and the two became team leaders for the most punishing task yet – navigating a Zodiac boat three kilometres down river, before a two kilometre hike uphill, carrying the waterlogged boat and their Bergens.

Both Kerri and Bonnie floundered as leaders, with Koby Abberton stepping up for Kerri’s Team Alpha and Sam Burgess taking charge of Bonnie’s Team Bravo.

During questioning with the DS, Bonnie admitted to feelings of self-doubt and that she was struggling with her emotions, saying:

The DS also checked in with Sam, impressed by his ability to drive Team Bravo to victory. An emotional Sam said his work ethic came from his dad, who sadly passed away from motor neurone disease when Sam was just 18.

Team leaders Kerri and Bonnie were given another chance to prove themselves, overseeing a kit inspection in a late night test of order and discipline.

Kerri operated with renewed confidence, but ultimately let her team down by not having a full water bottle. As punishment, Team Alpha were forced to stand silent and motionless on the Parade Square for more than two hours.

The DS summoned Kerri to the Mirror Room to discuss her failings in the day’s leadership tasks, telling her she looked like she’d aged 10 years in two days.

“I think a lot of people will think I’m nuts but I hope they see the reason behind it, that I want to challenge myself and inspire people.

“There’s too many women who think life is over when you hit 50 and it’s all downhill and I completely disagree. I think you can get better and keep challenging yourself. To me this is the ultimate challenge. I just love it, I love pushing myself.”

The 12 recruits still on course in the hope of passing SAS selection are:

Wednesday 7.30pm, recruits undergo a critical test of mental strength in a kill or be killed scenario; a brutally cold ice drill stops some dead in their tracks; and Koby takes charge as others begin to unravel.

Check out 7plus, where you can find uncensored episodes, deleted scenes, extended interrogations and exit calls.

SAS AUSTRALIA – Monday-Wednesday 7.30pm on Channel 7 and 7plus.