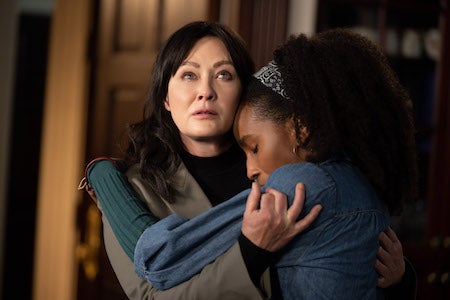 Revealing the harsh realities of toxic friendships and sorority hazing culture, Dying to Belong is a remake of the 1997 film of the same name, which starred Hilary Swank, Sarah Chalke, Jenna von Oÿ and Mark-Paul Gosselaar. Dying to Belong will debut this fall on Lifetime.

When journalism major Olivia (Onwuka) meets Riley (Rose), a shy freshman who suffers from anxiety, they become fast friends. Riley, whose mother Katherine (Doherty) was a legacy Pi Gamma Beta, decides to rush in hopes of following Katherine’s footsteps and is ecstatic when Olivia joins her. Sensing the opportunity to go undercover to write a story about hazing practices, Olivia soon discovers there are deadly secrets involved in being part of the “sisterhood.”

From 1959 to 2019, there has been at least one hazing death reported each year, and thirty reported within the last decade1. 95% of students hazed do not report it to officials2. Due to the pandemic, 2020 was the first year no hazing deaths were reported. Within the first two weeks of students returning to campus in 2021, two hazing deaths have already been reported3.

Dying to Belong marks Doherty’s second movie for Lifetime this year as she also stars in List of a Lifetime, the network’s centerpiece of the Stop Breast Cancer for Life campaign, for which Doherty directed special content that will roll out in October for Breast Cancer Awareness Month.