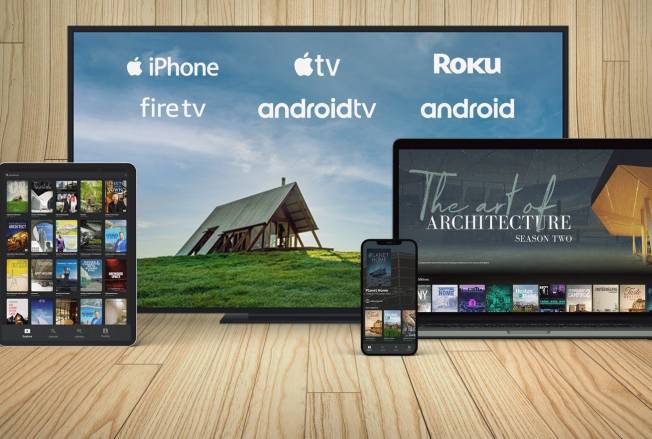 Shelter has partnered with Vimeo to bring these new apps and features to our subscribers. The apps are free to download, and are poised to enhance the Shelter viewing experience.

New subscribers can watch two full episodes of Shelter Originals for free on the shelter app or via the web. Episodes include Inspired Architecture Season 1, Episode 1: Permanent Camping and Architecture on the Edge Episode 1: Nishizawa House, available from October 1.

With over 300 hours of content, from October there are also specially curated Shelter Channels.

Inspired Architecture Season 2
Episode 1: Bangalley (15 mins) AUS 2021 (Available from October 1)
A home inspired by its location, perched on a rising monolithic headland of sandstone and shale, jutting out into the Pacific Ocean just north of Sydney in the beachside suburb of Avalon. Bangalley was designed to respond to this dramatic environment with a rustic rugged exterior and a raw but highly crafted interior. Architect: Rob Brown – Casey Brown Architecture

Episode 2: Phoenix House (15 mins) AUS 2021 (Available from October 4)
What happens when an architect designs their own home? Phoenix house is the story of architect Harley Graham coming back to his roots to honour the classic Australian Queenslander. Raised from the ashes of a dilapidated hardwood frame and reconfigured to suit the needs of a modern day family in Byron Bay, NSW. Architects: Harley Graham & Verity Nunan – HGA

Episode 3: Ozone House (15 mins) AUS 2021 (Available from October 11)
Tucked away in what is otherwise suburban Freshwater, Ozone House is built on the footings of the previous cottage and sits above the earth wherever it overhangs the footprint of the old. The house steps in and out amongst the existing trees on the site so that they could be retained, engaging with the landscape on all sides. It works efficiently with the climate to avoid the need for air conditioning, and by reusing all its roof water in the house. Architect: Matt Elkan – Matt Elkan Architect

Episode 4: Pine Springs (15 mins) AUS 2021 (Available from October 18)
Born out of the client’s desire for a contemporary take on the ‘modernist box’ he so keenly admired. A coincidental encounter at Palm Springs Modernism Week 2017, founded a fortuitous union of client and architect, bound by a shared interest and passion for mid-century design. The brief for the new home in Ballina, NSW was to provide a private escape, away from the hustle and bustle of Sydney where the client had spent his working life.Architects: Pam “PJ” Deasy & Harley Graham – HGA

Episode 6: Byron St Studio (15 mins) AUS 2021 (Available from November 1)
This house shows what can be achieved in just 58 square meters. Designed for second-generation cabinet maker Martin Johnston and his young family, the house merges many of the clients stylistic preferences, including the classic Queenslander and the mid-century fibro fishing shack. With the client designing and making all cabinetry and furniture throughout the home.
Architect: Justin Twohill – Büro Two Architecture

Never Too Small – Aus 2020 / 2021 (Available from October 1)
‘If it’s well designed, it doesn’t feel smaller.”
A series dedicated to beautifully and cleverly designed small spaces, Never Too Small explores the magic of making the most with minimal area. Addressing the rapid globalization of urban areas, and the demand for compact and affordable living spaces, the series travels across the globe to find the most economical small homes. With more than 20 bite-sized episodes to watch, Never Too Small engages with the architects behind the spaces, to examine the ideas, philosophies and stories behind their designs.

The Design Emotive – AUS 2019 – 2021 (Available from October 1)
A series dedicated to showing homes and designs that embrace the ideas of simplicity and minimalism, and the impact great design can have on you and your life. Featured new homes, apartments, house extensions, tiny homes, cabins, beach houses; and everything in between. What these homes and designs share is an approach to simplicity and minimalism. However, it doesn’t mean that minimalists necessarily live in these homes. Simplicity and minimalist design gives you space to breathe, gives you moments of relaxation and has the ability to calm you. It can also bring you a sense of delight, and provide simple moments of pleasure and joy. New to Shelter Channels, The Design Emotive features over 30 short episodes that take you inside an eclectic range of Australian minimalist spaces.

The Michael Blackwood Architecture Collection (All available from October 1)
New to Shelter Channels this October, The Michael Blackwood Architecture Collection adds over 20 feature-length award-winning documentaries to Shelter. With documentary features dating back to the 1960s, Blackwood’s filmmaking seeks to not ‘compete with the art itself,’ but to provide the audience with ‘intimate access to the artist or subject in an uncompromised fashion.’

Michael Blackwood Architecture Collection films new to Shelter include:
A Day With Zaha Hadid (57 mins) USA 2004
While guiding us through her retrospective exhibition “Zaha Hadid Has Arrived”, the renowned architect recalls her career from its beginning, discussing her education, inspiration and technique. The exhibition, located at The MAK in Vienna, features a new sculpture from Hadid entitled “Ice Storm” that serves as the centerpiece of the show and captures her sleek signature. From her famed Bergisel Ski Jump to Rome’s Museum of Contemporary Art, Hadid’s architectural resume shines in its diversity and exploration. A Day with Zaha Hadid reviews Hadid’s work of the last decade and celebrates her perpetually modern and daring designs.

Alvaro Siza: Transforming Reality (59 mins) USA 2004
Portugal’s renowned architect reviews his work with architectural historian Kenneth Frampton as they tour fifteen projects, including the Serralves Museum and the Aveiro University Library. Siza discusses his approach to architecture with Frampton, explaining that it is centered around the idea that the setting of a building is integral to its design and that a structure’s design should reinforce its surroundings by both enhancing and highlighting its potential.

Frank Gehry: An Architecture Of Joy (58 mins) USA 2000
Frank Gehry: An Architecture Of Joy illustrates the unique intertwining of art and architecture throughout Gehry’s spectacularly aeclectic career. In this portrait, Gehry explores his work of the 1990’s including The Guggenheim Museum in Bilbao and the Frederick R. Weisman Museum in Minneapolis, as well as his first European commission, the EMR Communication and Technology Center in Bad Oeynhausen, Germany. Seeing himself as an artist first, Gehry discusses his early relationships in the art world and how sculpture, painting and small scale work has influenced his architectural style. Like Rauschenberg, Johns, and Warhol, he has introduced “bad taste” into his concepts, while keeping himself outside of the contemporary dialogue between modernism and post-modernism. He has translated the vocabulary of contemporary art into an architectural language of his own, disobeying the rules of his profession and questioning its historic conventions.

Louis Kahn: Silence And Light (59 mins) USA 1998
As an architect, educator, and philosopher, Louis Kahn played a prominent role in the history of 20th century architecture. An examination of six of his most significant buildings gives insight to his unique vision: The Salk Institute in La Jolla; the Kimbell Art Museum in Fort Worth; the Center for British Art in New Haven; the library at Philips Exeter Academy in Exeter, New Hampshire; the Indian Institute of Management in Ahmedabad and the Parliament Buildings of Bangladesh in Dhaka.
The visits to the sites are enhanced with historic footage and sound recordings of Kahn.
(Winner Prix du Meilleur Portrait, Festival International du Film Sur L’Art 1998)

David Chipperfield: Form Matters (59 mins) USA 2011
When the Tuscan city of Pisa commissioned David Chipperfield to create a master plan that would bring new vitality to this historic place on the Arno, an exhibition of a selection of work produced by him in the last 25 years was also invited. Chipperfield chose “Form Matters” as a title for the exhibition, as ‘Form’ and ‘Matter’ are all-important key elements of the language of architecture. We asked him to lead the way through the models, drawings and photographs to explain his designs, which were realized all-over Europe, China, Japan, the United States and Mexico and to give us an accounting of his creative direction at each stop.