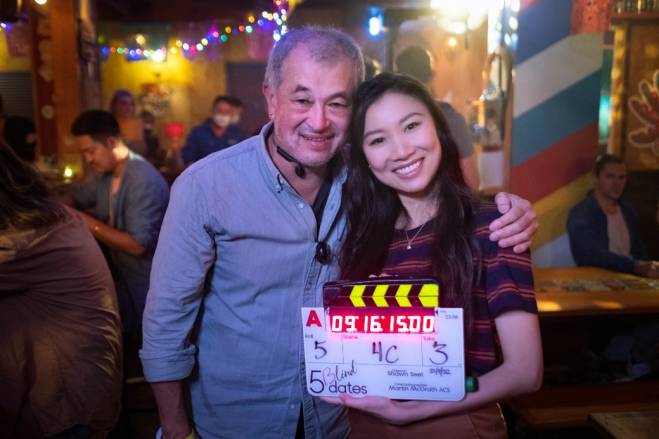 A fortuneteller tells a tenacious tea shop owner that she will meet her soulmate on one of the next five dates she goes on in this romantic comedy.

“I am so thrilled by this wonderful cast, led by the multi-talented Shuang Hu, who with Nathan Ramos-Park, has delivered a story that audiences around the world will fall in love with, as I did when I first read it,” said director Shawn Seet.

Whilst visiting her family in her hometown for her sister Alice’s (Wong) engagement festivities, Lia Ling (Hu) finds herself at a comedically tumultuous family luncheon with her best friend Mason (Swindells) and is gifted an unwelcomed prophecy that she will soon meet her suitor. Her family, unsure of Lia’s ability to discern a partner for herself, decides to set her up on five blind dates. Even though her true passion and current focus lie in saving her traditional tea-shop back in Sydney— tea-making being a passion inherited from her grandmother—Lia reluctantly agrees to go on these dates.

Five Blind Dates is produced by Amazon Studios and Goalpost Pictures Australia, with Goalpost’s Kylie du Fresne as producer and Ben Grant and Rosemary Blight as executive producers. Shuang Hu and Nathan Ramos Park are the co-writers and producers.