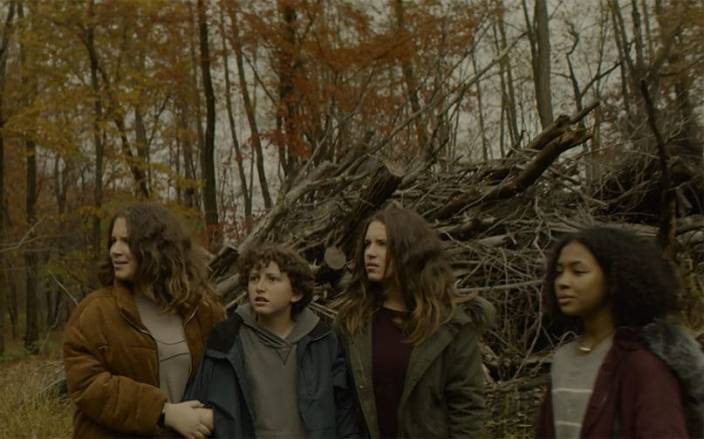 Shudder highlights for February 2022 include Slapface, All the Moons, They Live in the Grey and Hellbender.

After the death of his mother, Lucas, a loner who lives in a rundown home with his brother Tom, regularly seeks solace in the nearby woods. With his only “friends” being a group of female bullies, he keeps to himself most of the time. But, after a strange encounter with an inhuman monster, Lucas begins to withdraw from others. When the two reach a tentative trust, a bizarre friendship is born and Lucas is swept up in a series of primal adventures.

Slapface, which won the Best Audience Award for Best Horror/Thriller/Sci-Fi Film at the Cinequest Film Festival in 2021, was written and directed by Jeremiah Kipp (Black Wake; 60 Seconds to Die ‘Monster’; The Sadist; The Pod) based on his short film of the same title. The film stars August Maturo (Girl Meets World, The Nun), Mike Manning (Son of the South, Teen Wolf), Dan Hedaya (The Usual Suspects), Mirabelle Lee (Blood Ties), Lukas Hassel (The Blacklist), Libe Barer (Sneaky Pete), Bianca D’Ambrosio (The Bay, I Am Mortal, Fear of Rain) and Chiara D’Ambrosio (The Bay, I Am Mortal).

All the Moons
A Shudder Original
New Film Premieres February 10
Directed and co-written by: Igor Legarreta

North of Spain, at the end of the 19th century, during the final throes of the last Carlist war, a little girl is rescued from an orphanage by a mysterious woman after it’s destroyed by a bomb. Wounded and close to death, the girl believes the woman is an angel coming to take her to Heaven. Soon however, she discovers that this strange being has given her the gift of eternal life by turning her into a vampire.

Directed by Basque filmmaker Igor Legarreta (When You No Longer Love Me), All the Moons won several awards at the 25th Edition of The Fantasia International Film Festival, including Best Director, Best Cinematography and Audience Award. The film stars Haizea Carneros, Josean Bengoetxea, and Itziar Ituño.

They Live in the Grey
A Shudder Original
New Film Premieres February 17
Written and directed by: Burlee Vang and Abel Vang

While investigating a child abuse case, a young social worker discovers that a supernatural entity is tormenting the family. To save the parents from losing custody of their child, she must confront her fears and use her clairvoyance to stop the malevolent force.

16-year-old Izzy leads an isolated life on a lonely mountaintop. All she’s learned is from her protective mom and the wilderness that swallows them. It’s a gentle, quiet existence — except for when Izzy and Mom bang out loud songs for their band, H6LLB6ND6R. Izzy dreams of a live gig, but her mother thinks she’s too sick and mustn’t be around others. Questioning her illness and starved for companionship, Izzy sneaks down the mountain where she befriends brazen Amber. Izzy is in heaven until a cruel drinking game with a live worm unleashes a new kind of hunger.

Hellbender, which had its world premiere at the 25th Fantasia International Film Festival in August 2021, is the sixth feature film written and directed by the filmmaking Adams family, Toby Poser, John Adams, and their daughter Zelda Adams (The Deeper You Dig, Halfway to Zen, The Shoot).  Poser and Zelda Adams star in the film, along with Zelda’s sister Lulu Adams. Zelda took home the Best Actress award at the Fantasia International Film Festival.

AMC Networks’ Shudder is a premium streaming video service, super-serving members with the best selection in genre entertainment, covering horror, thrillers and the supernatural. Shudder’s expanding library of film, TV series, and originals is available on most streaming devices in the US, Canada, the UK, Ireland, Germany, Australia and New Zealand.