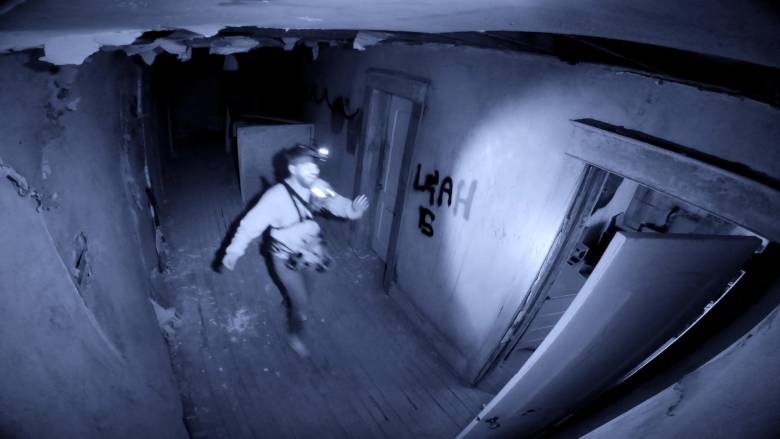 A disgraced and demonetised Internet personality (Joseph Winter) tries to win back his fans by live streaming himself, spending a night alone in an abandoned haunted house.

However, when he accidentally unleashes a vengeful spirit, his big comeback event becomes a real-time fight for his life (and social relevance) as he faces off with the sinister spirit of the house and her powerful following.

Deadstream stars Joseph Winter, who wrote and directed the film with Vanessa Winter.

Rome. An eclipse blocks out the sun, blackening the skies on a hot summer day – harbinger of the darkness that will envelop Diana when a serial killer chooses her as prey.

Fleeing her predator, the young escort crashes her car and loses her sight. She emerges from the initial shock determined to fight for her life, but she is no longer alone. Defending her and acting as her eyes is a little boy, Chin, who survived the car accident.

But the killer won’t give up his victim. Who will be saved? A triumphant return from Italian master of horror, director Dario Argento. Starring Ilenia Pastorelli and Asia Argento.

After a double mastectomy, Veronica Ghent (Alice Krige), goes to a healing retreat in rural Scotland with her young nurse Desi (Kota Eberhardt). She discovers that the process of such surgery opens questions about her very existence, leading her to start to question and confront past traumas.

The two develop an unlikely bond as mysterious forces give Veronica the power to enact revenge within her dreams.

V/H/S/99 marks the return of the acclaimed found footage anthology franchise and the sequel to Shudder’s most-watched premiere of 2021. A thirsty teenager’s home video leads to a series of horrifying revelations.

Twelve-year-old Tinja is desperate to please her mother, a woman obsessed with presenting the image of a perfect family. One night, Tinja finds a strange egg. What hatches is beyond belief.

The 101 Scariest Horror Movie Moments of All Time

Master filmmakers and genre experts celebrate and dissect the most terrifying moments of the greatest horror films ever made, exploring how these scenes were created and why they burned themselves into the brains of audiences around the world.

Featuring clips from Jaws, The Exorcist, Psycho, The Shining, It Follows, The Witch, Get Out and many other films.

Queer for Fear: The History of Queer Horror

Queer for Fear is a four-part documentary series about the history of the LGBTQ+ community in the horror and thriller genres.

From its literary origins with queer authors Mary Shelley, Bram Stoker, and Oscar Wilde to the pansy craze of the 1920s that influenced Universal Monsters and Hitchcock, through the “lavender scare” alien invasion films of the mid-20th century and the AIDS obsessed bloodletting of 80s vampire films.

Queer for Fear re-examines genre stories through a queer lens, seeing them not as violent, murderous narratives, but as tales of survival that resonate thematically with queer audiences everywhere.

Hosted and created by the Boulet Brothers, The Boulet Brothers’ Dragula: Titans is a ten-episode spin-off series starring some of the most popular drag icons from the show’s previous seasons competing in a grand championship of drag artistry and shocking physical challenges for a one hundred-thousand-dollar grand prize, the headlining spot on the upcoming world tour and the first ever “Dragula Titans” crown and title.

Shudder’s expanding library of film, TV series, and originals is available on most streaming devices in the US, Canada, the UK, Ireland, Germany, Australia and New Zealand. For a 7-day, risk-free trial, visit www.shudder.com.