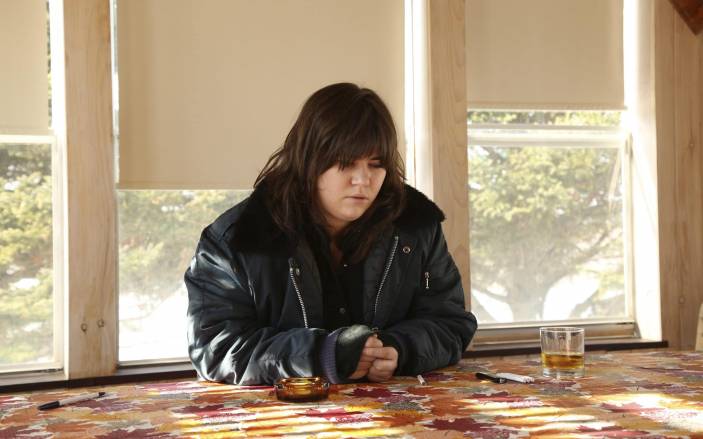 Five rich spoiled Asian twenty-somethings (Gijs Blom, Aviis Zhong, Yen Tsao, Philip Juan, Anechka Marchenko) are suffering from upper class ennui, unsure how to spend their days when so little is expected from them. In search of excitement, the five friends form the “Circle,” a group where they take turns designing a unique, extravagant experience for the others. But things go wrong when the privileged urbanites awaken after a night out, to find they have developed vampire fangs and an unquenchable thirst for flesh, blood and adventure at any price.

In the dead of winter, Catherine (Teagan Johnston), a talented musician who, having recently broken up her successful band, travels to her aunt’s remote coastal cottage to work on new material in solitude. Once there, she and local photographer Grace (Jenna Schaefer) spark up a budding romance while visiting an abandoned farmhouse with a disturbing past. Soon after, strange and seemingly supernatural occurrences begin to manifest at the cottage, escalating each night and dangerously eroding Catherine’s sense of reality.

The Boulet Brothers’ Dragula – New episodes to premiere every Tuesday

Behind the Monsters takes an in-depth exploration of the creation of favourite horror icons including Candyman, Chucky, Michael Myers and Freddy Krueger. No horror icon came out of a filmmaker’s first draft fully formed, there were early drafts, wrong turns, experimentation. Once made flesh (or latex), there’s presentation, impact, audience response and legacy. Each episode examines a horror icon who has broken free of the confines of the film from which it was born and become the stuff of legend.

Behind the Monsters – New episodes to premiere every Wednesday

After agreeing to be an overnight shomer (a Jewish practice in which a person watches over the body of a recently deceased community member), a young man who’s lost his faith discovers the house in which he’s sitting the vigil hides a dark and terrifying secret.

A young medical student attempts to cure her brother from a terminal sleep illness called Fatal Familial Insomnia, where you are unable to sleep until you die. On her quest to help him, a more sinister reason for his condition is revealed.

It’s All Hallow’s Eve. A trio of costumed misfits with very special dietary requirements seizes a Mexican cantina and force the staff to engage in a late night of gaming, food and libations. The only caveat is what’s on the menu.

From post-apocalyptic westerns to demented comedies to terrifying horror and gore, Etheria serves up the perfect blend of mind-bending and panic-inducing excitement from the best emerging women genre directors in the world. Each episode showcases a vision of the fantastic in this anthology series created to introduce amazing directors to devoted genre fans.

At the height of the Cold War, a Soviet spacecraft crash lands after a mission gone awry, leaving only one survivor. After a renowned psychologist is brought in to evaluate the cosmonaut’s mental state, it becomes clear that something alien has come back to Earth with him.

A terrifying tale of survival in the mangrove swamps of Northern Australia.

Holidays is an anthology feature film that puts a uniquely dark and original spin on some of the most iconic and beloved holidays of all time by challenging our folklore, traditions and assumptions.

On a desolate stretch of desert highway, two men on the run from their past, a band on their way to the next gig, a man struggling to get home, a brother in search of his long-lost sister and a family on vacation are forced to confront their worst fears and darkest secrets in these interwoven tales of terror and remorse on the open road.