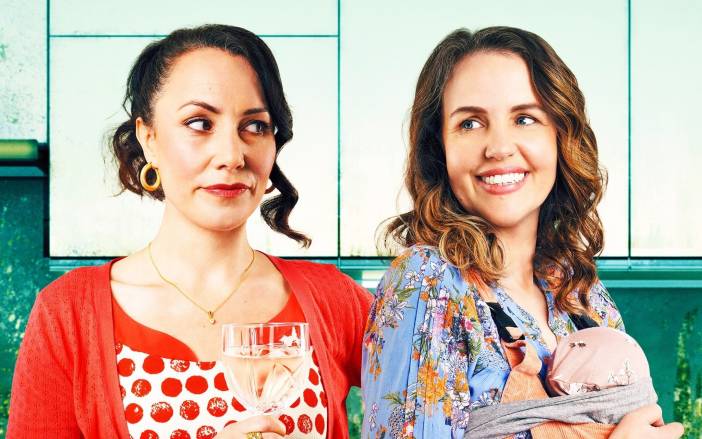 Sonia & Cherry is an odd-couple comedy about best friends who think they know each other, until they become mums.

With principle funding from Screen Australia, Sonia & Cherry is back for a second season from October 18 with more relatable, brutally honest, pelvic floor challenging hilarity.

In each of the six snack-size 7–8 minute episodes, Cherry and Sonia continue to navigate their different approaches to parenting, in a comedic and empathetic look at their friendship after kids.

Written, directed by, and starring Victoria Thaine (The Loved Ones, Caterpillar Wish) and produced by Naomi Mulholland (Clickbait, Wentworth) Season Two of Sonia & Cherry highlights the gap between fantasy and reality of parenthood, and the struggle to maintain the status quo as the ‘perfect’ mum; whatever that even means!

“After numerous delays due to covid, we are so excited to be launching the second season of Sonia & Cherry. We are truly honoured to have this opportunity provided to us by Lee Naimo and the team at Screen Australia and look forward to bringing more stories to our screens that provoke and entertain,”

Sonia & Cherry tackles the unflattering aftermath of birth and rivalry for the best parenting approach. It dives headlong into the harsh realities of the post-baby body and the impact of parenting on mental health. It edges toward something a little darker when Sonia declares Cherry has gone ‘post natal’, and when Sonia is clearly drunk in the middle of the day.

“Sonia & Cherry challenges the idea of the perfect mother through the actions of best friends with completely different parenting styles, in a world where parents are overwhelmed by advice from all corners of the internet and assaulted by images of the ‘ideal’ Mum,” says Thaine on what inspired her to write Sonia & Cherry.

“We wanted Sonia & Cherry to expose a more real, messy and flawed ideal, where it’s okay to get it wrong sometimes. And when you do get it wrong, who better to have by your side than your bestie,”

Screen Australia’s Senior Online Investment Manager Lee Naimo said, “We’re proud to support Victoria Thaine and Naomi Mulholland take the next step in their careers to create such a relatable and entertaining series that is sure to make parents laugh (and cry!). The team has shown great adaptability throughout COVID and I look forward to seeing Sonia & Cherry engage audiences on YouTube.”

Ruthless in its portrayal, Sonia & Cherry doesn’t just explore questionable parenting, unruly toddlers and the perils of plastic straws, it also wrestles with the big questions, such as ‘How early is too early to drink wine?’

Sonia & Cherry is perfect for binge-watching whilst hiding in the pantry – for those times that you need a good laugh but refuse to share the snacks.

Naomi Mulholland and Victoria Thaine have each been in the entertainment industry for around 20 years; Naomi most recently as a line producer for some of Australia’s major network dramas and international films, and Victoria as an actor with a solid career on both the big and small screen. They first met on the set of the Australian police drama series Rush, and in 2012 made a short film called The Kingdom of Doug that went on to win several awards including Best Short at Flickerfest, Best Director, and SBS Television Award at St Kilda Film Festival and Best Australian Film at Stranger with My Face. They formed Cloudberry Films to continue their creative partnership and produce original content that keeps shining a light on their individual careers as creative producer (Naomi), and writer & director (Victoria).