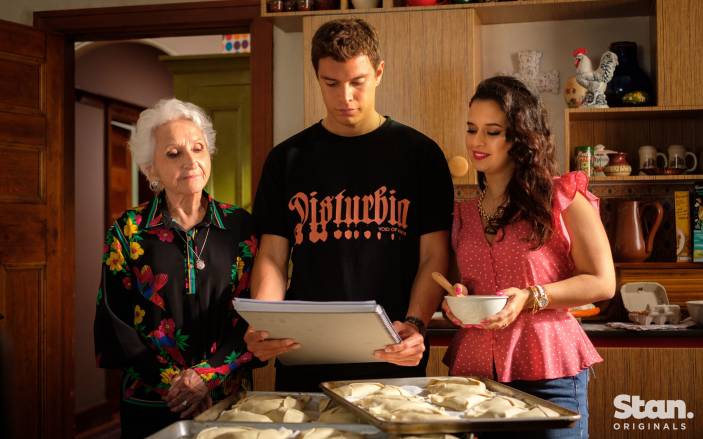 Australia’s biggest lineup of original series and films is coming to Stan this Summer.

Beginning this December with the highly anticipated second season of our most watched Stan Original Series ever Bump, get ready to see Nathalie Morris, Carlos Sanson Jnr., Claudia Karvan and Angus Sampson return as Australia’s favourite family. The Stan Original Film Christmas on the Farm also premieres this month, starring Poppy Montgomery, Hugh Sheridan, Darren McMullen and Nicholas Brown. Our unrivalled lineup of Australian-made Stan Originals continues with a who’s who of Hollywood, with the thrilling Zac Efron-led feature Gold and Jamie Dornan-led series The Tourist both coming soon. This summer, Stan takes its commitment to supporting locally produced originals to a whole new level. This summer, Australian-made drama lives on Stan.

When it comes to special brands of chaos, the Chalmers-Davis and Hernandez families are the gifts that keep on giving, and while Oly (Nathalie Morris) and Santi (Carlos Sanson Jr) continue to get to know each other, they discover just how much families can mess you up. Meanwhile, Angie (Claudia Karvan) ​​and Dom (Angus Sampson) continue to deal with the fallout of their separation, while dealing with the complicated new relationships and dramas they have found themselves immersed in.

Christmas on the Farm

Starring Australian-American actress Poppy Montgomery (Without a Trace), Hugh Sheridan (Packed to the Rafters), Darren McMullen (House Husbands) and Nicholas Brown (Wakefield), the Stan Original Film Christmas on the Farm follows Clementine Jones (Montgomery), an Australian author whose autobiographical book about life on a Queensland farm is snapped up by powerhouse publishers London & London. But the truth is, “Clementine” is actually Emmy Jones – a New York socialite who has been passing her late mother’s journals off as her own. When the publisher announces that they’re travelling to Australia for an authentic ‘Clementine’ Christmas before signing off on the lucrative deal, Emmy must race back to the old family farm, roping in her cousin (David Sheridan) and his husband Miles (Brown) to help maintain the ruse. One problem: London & London CEO Ellison (Jennette Cronin) shows up with her handsome adult son Jack (McMullen) in tow – but if he remembers the night he met Emmy in New York, the deal could all come crashing down!

Christmas on the Farm – 1st December

Only on Stan. Olivia Colman (The Favourite, The Crown) and David Thewlis (I’m Thinking Of Ending Things, Fargo) play husband and wife pair, Susan and Christopher Edwards, alongside Kate O’Flynn (Bridget Jones’s Baby), Dipo Ola (We Hunt Together), Samuel Anderson (The History Boys), David Hayman (The Boy in the Striped Pyjamas), Felicity Montagu (I’m Alan Partridge) and Daniel Rigby (Eric and Ernie, Flowers). Inspired by real events, the four-part limited series is created and written by Ed Sinclair and sees writer-director Will Sharpe (The Electrical Life of Louis Wain, Flowers) bring his singular vision to the story. Landscapers is the latest project from SISTER in association with South of the River Pictures

Based on the international bestseller of the same name by Emily St. John Mandel and premiering in the U.S. as an HBO Max Original, Station Eleven tells the story of the inhabitants of a new world as they rebuild culture, society and identity after a devastating pandemic. As these characters face threats to their new way of life, they hold onto the best of what’s been lost. Station Eleven stars Mackenzie Davis, Himesh Patel, Daniel Zovatto, David Wilmot, Matilda Lawler, Philippine Velge, Nabhaan Rizwan and Lori Petty, with Gael Garcìa Bernal and Danielle Deadwyler recurring.

Same Day as the U.S.

Zoey’s Extraordinary Christmas will bring the original cast back for a holiday encore, with the film picking up where season two left off, continuing Zoey’s journey as she navigates work, family, love, and everything in between. Golden Globe® nominated Jane Levy, Skylar Astin, Alex Newell, John Clarence Stewart, Andrew Leeds, Alice Lee, Michael Thomas Grant, Kapil Talwalkar, Mary Steenburgen, Peter Gallagher, and Bernadette Peters (nominated for an Emmy® for her performance in the series), will all reprise their roles, bringing the same love and passion to the full-length feature film that loyal fans have come to know from the television show.

Brand New Series / All Episodes at Once / Same Day as the U.S.

After rotting in prison for over a decade, America’s ultimate hero and uber patriot MacGruber (Will Forte) is finally released. His mission: to take down a mysterious villain from his past – Brigadier Commander Enos Queeth (Billy Zane). With the entire world in the crosshairs, MacGruber must reassemble his old team, Vicki St. Elmo (Kristen Wiig) and Dixon Piper (Ryan Phillippe) in order to defeat the forces of evil.

Claws is a midnight-dark, wickedly funny meditation on female badness set in a South Florida nail salon. The series follows Niecy Nash-Betts’ Desna Simms, who, alongside her crew of manicurists from the Nail Artisans of Manatee County salon, rises to power in the crime world to claim her share of cash and respect. It’s the story of hardworking women trying to get by in this economy, set against the surreal, bright, gritty landscape of Florida and the luscious, absurd, extreme excesses of the crime world. In addition to Nash-Betts, Claws stars Carrie Preston, Judy Reyes, Karrueche Tran, Jenn Lyon, Kevin Rankin, Jason Antoon, with Harold Perrineau, and Dean Norris.

Pen15 is an R-rated “traumedy” set in middle school as it really happened in the year 2000. Anna Konkle and Maya Erskine play versions of themselves as thirteen year old outcasts, surrounded by actual thirteen year olds. In this world, seventh grade never ends and the pains of growing up are inevitable.

Biggie: The Life of Notorious B.I.G

Directed by Mark Ford, Biggie: The Life of Notorious B.I.G. is the first biography to be authorised by his estate and will be the most personal and revealing documentary about the late Christopher Wallace that anyone has ever seen. It will provide interviews with those closest to him including his widow Faith Evans, his mother Voletta Wallace, his close friend Lil Cease and members of Junior Mafia as well as cultural icons Sean “Diddy” Combs, Shawn “Jay Z” Carter and Nas.

Fresh from the success of their first four series together, Top Gear’s line up of presenters – cricket legend Freddie Flintoff, actor and comedian Paddy McGuinness, and automotive journalist Chris Harris – are back behind the wheel as they travel the globe and hit the track in some never seen before adventures. The thrilling new season of Top Gear is jam-packed with action that adrenaline-fuelled motoring super fans will love.

Grab the popcorn and hit play on these blockbuster films coming this summer including: Send It!, Jack The Giant Slayer, Tammy, 300, Four Holidays, Inception and more!

Stan is your one-stop destination for entertainment for the whole family with countless hours of shows for kids of all ages. This month will see the exclusive premiere of Dragons: Nine Realms: Season 1 and brand new episodes of Trolls: Trollstopia: Season 2. Plus brand new movies to discover on Stan including Lego DC Comics: Aquaman: Rage Of Atlantis, Harriet The Spy, Free Willy 1 & 2 and The Wizard of Oz.