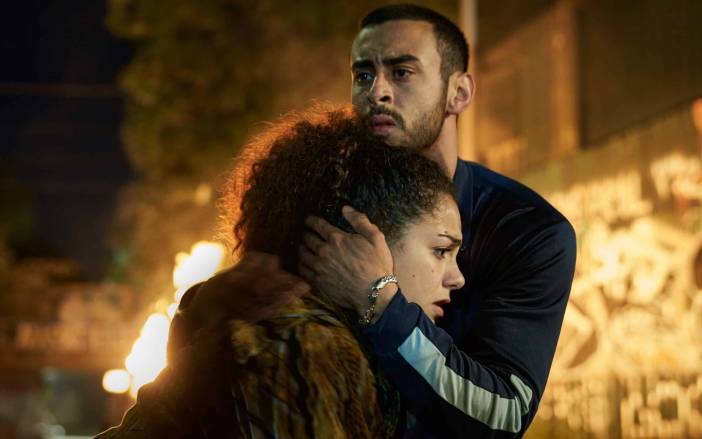 From the producers of Married At First Sight comes the Stan Original Dating Series Love Triangle, a brand new eight-part dating series premiering 6 October, only on Stan. Love Triangle is a modern take on the struggle for love in the fickle and fast-paced modern dating world – delivering a sensational new reality format with some mind-blowing twists.

The series challenges a group of singles to relinquish their grasp on what they think their perfect partner should look like, and instead choose someone, sight unseen, based on a deeper connection. The first two episodes of the brand new series will premiere 6 October, with new episodes every Thursday, only on Stan.

Season Two / All Episodes at Once

Starring Ṣọpẹ Dìrísù, alongside a renowned ensemble cast, Gangs of London Season 2 picks up one year after the violent reckonings of the first season, with the map and soul of London redrawn.

The surviving Wallaces are scattered, the Dumanis broken and estranged, and ex-undercover cop Elliot is now being forced to work for the investors. To restore order, the investors have aligned behind heroin baron Asif Afridi and together they have installed a new ruling force in London in the form of brutal gang leader – Koba.

The last season of All American saw star wide receiver Spencer James (Daniel Ezra) facing a huge moral decision: turn his back on his success and return to his family or stay at the affluent Beverly Hills High School that can help further his football dream?

Season 5 delivers even more high-octane drama, following Spencer’s decision to leave Beverly Hills High behind to return to Crenshaw and play for his late father’s team – with his longtime coach Billy Baker coming along for the ride with him.

One of Us is Lying

Based on the New York Times #1 best selling novel of the same name by Karen M. McManus, the brand new season of One Of Us Is Lying picks up right where we left off from Season One, following a major cliffhanger ending.

The series follows five high school students who enter detention – with only four walking out alive. A tense investigation ensues, with the four all having the reasons for being potential suspects… but all is not as it seems, and one of them is lying.

In a world of privilege and glamour, two young women’s friendship transcends their strikingly different classes as they prepare to complete their education and enter vampire society.

One as a powerful Royal, the other a half-vampire Guardian trained to protect against the savage ‘Strigoi’ who threaten to tear their society apart. That is, if Royal infighting doesn’t do the job first.

An emotionally driven mini-series about the remarkable woman who risked everything to save countless lives from imprisonment and death at the hands of the Nazis. Filled with history, suspense, and romance, Passport to Freedom is inspired by the courageous, true story of Aracy de Carvalho.

Aracy de Carvalho is a young clerk at the Brazilian Consulate. For two years, she has been secretly issuing passports to Jews without the dreaded “J” stamp, which not only won’t allow them to travel, but will doom them to the horrors of concentration camps.

Walker is a reimagining of the long-running series Walker, Texas Ranger, starring Jared Padalecki (Supernatural) as Cordell Walker, a widower and father of two with his own moral code, who returns home to Austin after being undercover for two years, only to discover there’s harder work to be done at home.

He’ll attempt to reconnect with his creative and thoughtful son (Kale Culley, Me, Myself and I) and his headstrong, somewhat rebellious teenaged daughter (Violet Brinson, Sharp Objects) and navigate clashes with his family – an ADA brother (Keegan Allen, Pretty Little Liars) who stepped in during Walker’s absence, his perceptive mother (Molly Hagan, Herman’s Head) and his traditional rancher father (Mitch Pileggi, The X-Files).

Senorita 89 is a thriller set in Mexico’s glamorous ’80s scene. It follows Concepción (Ilse Salas), the matriarch of the most important beauty contest in the country. Together with a team of expert makeup artists, trainers, and even surgeons, she welcomes 32 finalists to her estate, La Encantada. There, they will endure three months of arduous training until they reach the Miss Mexico pageant.

The brand new season of RuPaul’s Drag Race UK will see a dazzling beauty inspired by Peppa Pig to a queen who “crash-landed down from Doja Cat’s Planet Her along with 12 queens compete to be Britain’s Next Drag Superstar.

It’s time to get comfortable and settle in for some new additions in October, including The Good Doctor: Seasons 1 – 4, RuPaul’s Drag Race UK: Season 4, For Life: Seasons 1 & 2 and more!

Grab the popcorn and press play on these blockbuster films coming in October including: Aquaman, 2012, Mass, Terminator Salvation, Fantastic Beasts: The Crimes Of Grindelwald, Scooby-Doo, Scooby-Doo 2: Monsters Unleashed and more!

Abominable and the Invisible City

Abominable and The Invisible City is a comedy adventure series that continues the wild and wooly fun of Abominable. Through Everest the yeti, Yi, Jin, and Peng know that there’s a whole magical world out there, and now it’s even closer than they think! When they discover that their surroundings are teeming with magical creatures in need of their help, the kids will set out on extraordinary and heartfelt adventures throughout their city and beyond.

Stan is your one-stop destination for entertainment for the whole family with countless hours of shows and movies for kids of all ages. October will see some brand new additions including: Abominable and the Invisible City: Season 1 Episodes 1 – 10, Pixels, The Angry Birds Movie, The Dark Crystal, Labyrinth Lost and Found Music Studios: Season 1 and more!