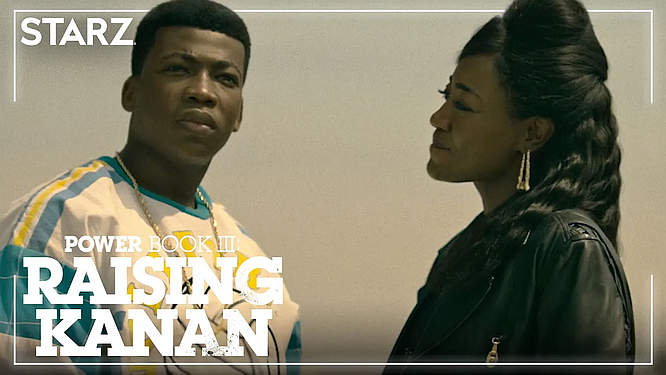 STARZ released a new teaser today for “Power Book III: Raising Kanan,” revealing the August 14 premiere date for the series’ second season. New episodes will be available weekly on Sundays at midnight on the STARZ app, all STARZ streaming, and on-demand platforms, and internationally on the STARZPLAY premium streaming platform. On linear, it will debut on STARZ @ 9:00PM ET/PT in the U.S. and Canada.

Set in the early 1990’s, the third series in the “Power” Universe tells the origin story of fan-favorite character “Kanan Stark” and his entry into the criminal world through his mother, who ruthlessly runs the family’s drug empire. It stars MeKai Curtis in the titular role of “Kanan” and Tony® Awards winner Patina Miller (“Madam Secretary,” The Hunger Games Franchise) as his mother, Raquel “Raq” Thomas.

As we enter season two, Raquel ‘Raq’ Thomas has gained control over the city’s drug trade, but her son is slipping away. Kanan Stark returns to Queens uncertain of his future with the family business, and because of Detective Howard’s lingering secret, he’s even more uncertain of his past. Kanan searches for the truth while Raq boldly expands the business into hostile Mafia territory. Lou-Lou has other plans that revolve around his emerging record label, but Raq isn’t about to let his side hustle get in the way of her expansion. Although Marvin remains Raq’s loyal soldier, he struggles to earn Jukebox’s forgiveness and become the father she deserves. The ties that bind this family are becoming undone, but Raq will stop at nothing to hold them together.