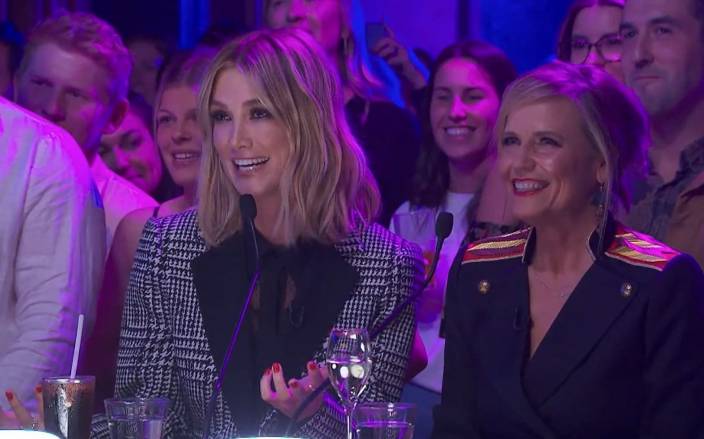 In Tuesday nights episode, there is a divide on The Block, no doubt about it.

Ronnie is still offended that Josh and Luke and Tanya and Vito didn’t come to their winners and grinners dinner.

The two couples that didn’t go say they were rehearsing for the lip sync battle challenge.

Jesse is a bit stressed at House No.5. It’s the biggest house and they have so much to do.

Kinsman arrives on site to install the kitchens, they all look amazing.

Mitch and Mark want to have VJ panelling on their kitchen roof, but there is something wrong with the structure of the building and it is out of whack. Keith and Dan advise the boys to stick with plaster.

In House No.4 Julian Brenchley makes another visit, to give Josh and Luke advice on the wall issue with their outside bathroom. He says they must use screens instead of walls, but the boys insist they still might have a chance and they want to go to council, and get a lawyer.

Delta Goodrem arrives on The Block, she is going to be the special judge this year alongside Shaynna Blaze with the lip sync challenge. Everyone is really excited to meet Delta. She goes from house to house to give them all advice.

After lots of rehearsals it’s challenge time – one of the best nights on The Block.

The famous Lip Sync Battle challenge is back after a year off – once again held at the famous Gershwin Room at The Espy in St Kilda.

The challenge is called on Monday morning and each of the couples are given a category from A2 Milk.

Ronnie and Georgie get pop (Sia, Chandelier), Mitch and Mark boy band (Wham, Wake Me Up Before You Go Go) , Tanya and Vito get country (Dolly Parton and Kenny Rogers, Islands In The Stream), Josh and Luke musical theatre (The Lion King hakuna matata), and Kirsty and Jesse get rock (Queen, Bohemian Rhapsody) .

They have a few days to rehearse and then perform on Thursday night in front of a crowd and judges Shaynna Blaze and Delta Goodrem.

The Blockheads also get their builders involved in the challenge.

On the night everyone is very nervous but they all do fantastic.

In the end it’s Ronnie and Georgie who pull off another win after judging, with Tanya and Vito coming second.  They win $5000 and that all important gnome.

Josh and Luke in particular are furious, they thought they had the challenge in the bag.

The Block airs Sunday to Wednesday on Channel 9 and 9Now