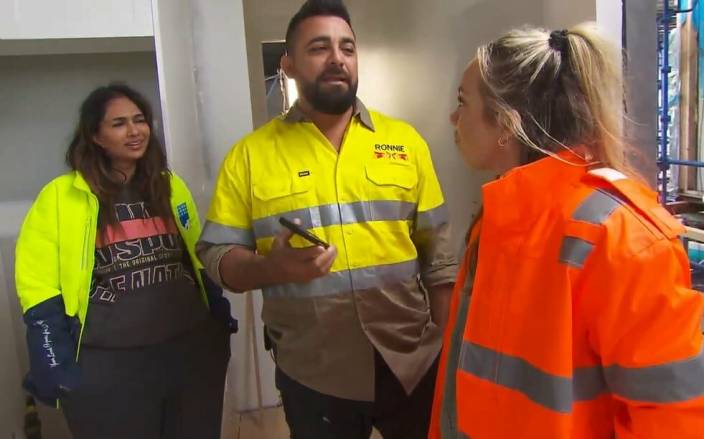 In order to finish the kitchen reveal in two days, everyone is working very hard.

A bespoke cutting board for Scott Cam that will run the entire length of his kitchen island in his house is being made by block favourite Christian Cole.

Keith finds a significant flaw in one of the bathroom roofs and is furious with Omar and Oz for it. Because of improper construction, the gyprock could collapse at any time. Keith has had it with Omar and Oz, and he’s very serious about it.

Block royalty Ronnie arrives at The Block in a limo and immediately heads to Ankur and Sharon in House No.3 for a painting lesson and a pep talk.

After learning about it, Rachel decides to visit, which she later regrets doing. Because Ankur and Sharon threatened to quit The Block last week, she thinks they are receiving preferential treatment. She thinks the playing field is not level.

In addition, Ronnie visits Oz and Omar and logs 17 trades. He questions what the boys are doing and how they manage to pay for it.

Tom and Sarah-Jane go to Suncorp to get their Game Changer approved. It’s a self-contained retreat near their house’s dam.

When Omar and Oz aren’t present for Friday night drinks, Ronnie stirs the pot. He claims that they cannot afford all of their trades and that something fishy is going on.

Tom claims to have seen people go to House No.5 at all hours of the night and is suspicious. Sharon drops a bombshell, claiming that she has heard Omar and Oz fire tradies and then block their phone numbers.

Ronnie said there’s no use complaining and the contestants should bring it up.

Will they have the courage?

Ankur and Sharon win the $1,000 antique valuing challenge, which irritates Rachel because she believes they are getting too far ahead.

The next episode of The Block airs Sunday night on Channel 9.