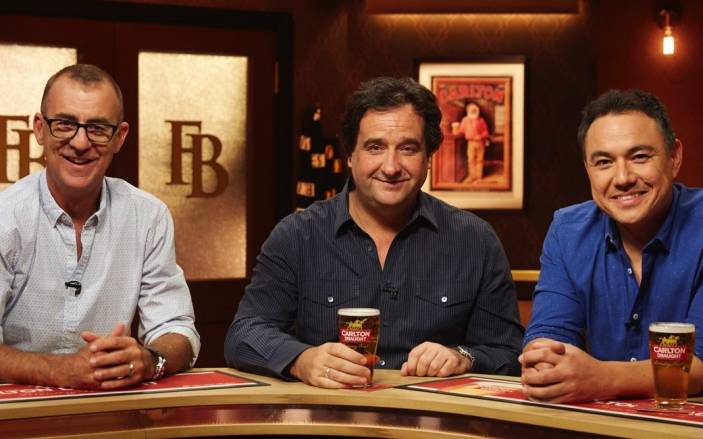 The greatest summer of cricket ever heats up this week on the Seven Network, with the WBBL’s eagerly awaited finals series and the return of The Front Bar for the first of two side-splitting Ashes editions.

The WBBL 07 final series should be a classic, as the world’s best women’s T20 competition is decided over three sudden-death matches featuring the top four teams.

The Front Bar will also be back with a bang tomorrow night when two of cricket’s and the Ashes’ all-time greats – former England star all-rounder Lord Ian Botham and Australia’s all-time leading run-scorer, Ricky Ponting – join Mick Molloy, Sam Pang and Andy Maher at the bar.

The WBBL finals series kicks off tonight at 7.00pm AEDT on 7mate with The Eliminator, a mouth-watering match-up between the regular season’s third and fourth-placed teams, Brisbane Heat and Adelaide Strikers, at Adelaide Oval.

The winner of that match takes on the second-placed Melbourne Renegades on Thursday night in The Challenger at Adelaide Oval, live and free on 7mate at 7.00pm AEDT.

The team that wins The Challenger will earn the right to face the minor premiers, Perth Scorchers, in the match everyone’s been waiting for – the WBBL Final. Tune in to see who will take this year’s WBBL crown on Saturday from 7.00pm AEDT on Channel 7 and 7mate.

The mood will be far more light-hearted on Thursday night when The Front Bar returns for the Ashes Edition at 8.30pm on Channel 7 and 7plus in all capital cities.

Mick Molloy said he was looking forward to swapping his trusty Sherrin for a Kookaburra: “It’s great because we can all relate to cricketers. Andy’s like Don Bradman, but the Don in the 1970s. I’m your Merv Hughes type who does the heavy lifting, and Pang is like Phil Tufnell – funny, but can’t bowl to save himself.”

The Front Bar will be back next Thursday, 2 December, at 8.30pm for a second Ashes Edition, when the special guests will include Australian wicket-keeping great Rod Marsh.

“It’s already been a cracking summer of cricket, but things crank up a gear this week. We’ve reached crunch time in the world’s #1 women’s T20 competition, with this year’s WBBL finals series set to be decided over three epic contests.

“Fans also won’t want to miss the return of everyone’s favourite sport show, The Front Bar, as the countdown begins to the electrifying action of the Big Bash League and Test cricket’s ultimate contest, the Ashes. The only place to catch every ball live and free is Seven, Your Home of Cricket.”

The Front Bar, Ashes Edition – Thursday 8.30pm on Channel 7 and 7plus