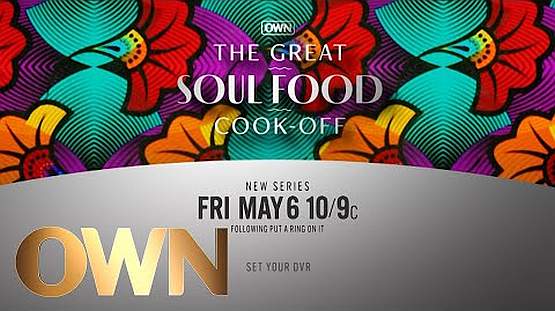 “The Great Soul Food Cook-Off,” a first-of-its-kind soul food cooking competition series highlighting Black chefs and the Black culinary traditions that are the cornerstone of American cuisine, was announced today by discovery+ and OWN: Oprah Winfrey Network. The six-episode, one-hour series premieres on OWN on Friday, May 6, and fans can watch Live and DVR the new show through June 10.

Today, Black culture is being recognised like never before in music, cinema, fashion, television, sports, and other fields, but that same cultural respect is long overdue in the kitchen. OWN collaborated with Discovery+ on the original series “The Great Soul Food Cook-Off,” which is a cooking competition that highlights the culinary achievements of Black chefs through challenges that emphasise the past and present of soul food. In this high-stakes, spiritual, and emotional competition, eight chefs will compete throughout the evening, but only one will win the ultimate prise of $50,000.

“Soul food describes a style of cuisine that represents the creativity and skill of Black cooks from many cultures within the African diaspora. This series is a celebration of long-standing traditions we hope to introduce and spotlight for new and existing viewers as we shine a light on a few of today’s most talented Black chefs and culinary curators,” said Tina Perry, president, OWN: Oprah Winfrey Network.

“The Great Soul Food Cook-Off” is hosted by acclaimed chef and television show host Kardea Brown. Brown will be joined by some of the world’s best chefs, Eric Adjepong and Melba Wilson as they critique the chefs’ weekly creations.

Additional judges that will join Adjepong and Wilson include:

The competition premieres with a Soul Starter Challenge paying homage to the foundational “meat and three,” a meal featuring a portion of meat and three sides that are African American community must-haves. In this first challenge, “The Great Soul Food Cook-Off” chefs form teams and are challenged to a Meat N’ Three Knockout, preparing smothered pork chops, macaroni and cheese, collard greens, and potato salad. The winning team holds an advantage going into the main Cook-Off Challenge, where the chefs create innovative dishes with staple ingredients. So who will dig the deepest and draw inspiration from their ancestors to win, and who is going home?

Brown, host of Food Network’s Delicious Miss Brown, currently in its 6th season, and judge on the network’s Spring Baking Championship is a contemporary Southern cook born in Charleston, South Carolina. She is of Gullah/Geechee descent, a term used to describe a distinct group of African Americans living in the coastal areas of South Carolina and Georgia who have managed to preserve much of their West African language, culture, and cuisine. Her love for cooking started in her grandmother’s kitchen, learning to cook Gullah dishes that were passed down from her mother. Although she loved cooking as a hobby, Kardea did not envision herself pursuing a career in the culinary field. Instead, she obtained a bachelor’s degree in psychology and embarked on a career in social services. But in 2013, she switched gears and began to pursue cooking. She created The New Gullah Supper Club, traveling from state to state cooking traditional Gullah dishes with a contemporary twist. Kardea has since made dozens of guest television appearances on shows such as Good Morning America, The TODAY Show, as well as Food Network’s Beat Bobby Flay, Chopped and The Kitchen, among many others.

What’s Happening On The Young and the Restless Today Tuesday July 5, 2022 on CBS

What’s Happening On The Bold and The Beautiful Today Tuesday July 5, 2022 on CBS

What’s Happening On Days of Our Lives Today Tuesday July 5, 2022 on NBC

Who’s On The Today Show Tuesday July 5, on ABC

Syfy’s “Resident Alien” Season 2 Is Back!

BritBox US and Canada July 2022 Highlights