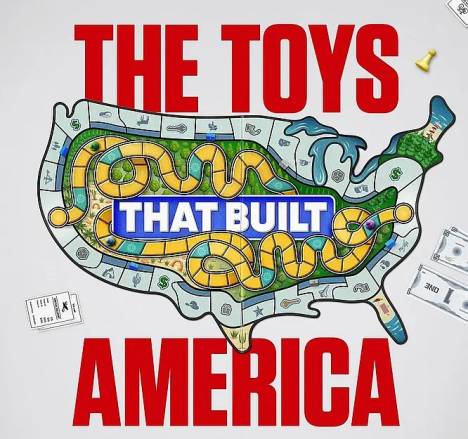 The HISTORY® Channel unboxes the next installment of its popular “That Built” franchise with the new four-part docuseries “The Toys That Built America” premiering Sunday, November 28 @ 9PM ET/PT. “The Toys That Built America” chronicles the toy titans whose imaginations soared to build billion-dollar empires, the rivalries that gave rise to the modern toy industry, and the history of the visionaries behind iconic products like Monopoly® and G.I. Joe®. Additionally, through its “Mission To Honor” award-winning public outreach campaign, the network is partnering with Blue Star Families as an extension of its longstanding commitment to giving back to those who served and are serving in the military with a donation of toys and educational items during the holiday season.

Against the backdrop of major events in American history like the Civil War, the Great Depression, and World War II, “The Toys that Built America” shares a story that brings nostalgic toys to the forefront as driving forces behind untold cultural and economic shifts. The four-part docuseries explores visionaries such as the Parker Brothers, Milton Bradley, and Ruth Handler who transformed a small toy company into the billion-dollar empire known as Mattel®. It reveals little-known details behind groundbreaking innovations like the Frisbee®, and accidental discoveries like how the Slinky® was created. Additionally, the docuseries unveils competitive rivalries between iconic brands that changed the fabric of our nation forever. Blending dramatic reenactments and archival footage with interviews from experts, biographers, and others, each episode brings to life the surprising tales of the men and women who created some of America’s most beloved and enduring toys including Silly Putty®, Barbie®, Hot Wheels®, Matchbox Cars®, and other famous classics.

“Toys teach us to imagine, have fun and, most importantly, dream big,” said Eli Lehrer, Executive Vice President and Head of Programming for The HISTORY® Channel. “In ‘The Toys That Built America,’ we learn the fascinating history behind the inventors of some of the greatest and most ingenious toys of all time – many of which shaped our childhoods. As toys continue to encourage a new generation to dream bigger, we are proud to continue our commitment to honor and support military families by partnering with Blue Star Families to thank and give back to those who have sacrificed to serve our country.”