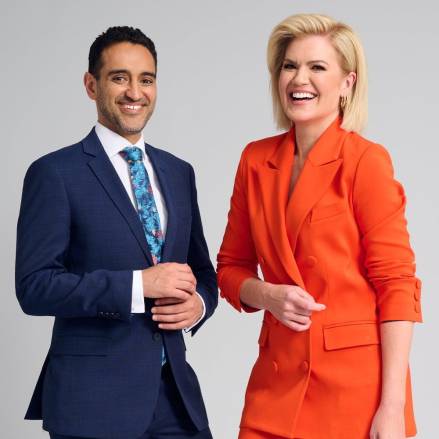 Channel 10’s The Project have announced the arrival of Sarah Harris as new panellist.

The Project’s newest host has been teased mercilessly, and today Network 10 revealed Sarah Harris will join the panel in 2023 for five nights a week, Sunday through Thursday.

With more than 20 years of journalism experience, Sarah brings to the job interviews with everyone from rock stars to royalty as well as coverage of major events like the Christchurch earthquake, the Black Saturday bushfires, and the 2012 Summer Olympics in London. Additionally, she has experience managing high profile talent in front of live audiences and landing celebrity interviews.

The mother of two, who has been a member of the Network 10 family for nearly ten years, has made her mark on Australian television as a reporter, presenter, and most recently as co-host of Studio 10.

Waleed Aly, who will continue to be a regular on the show from Monday through Thursday, is joined by Sarah.

Sarah said: “This is one of the biggest and best jobs in TV. How could I say no?

“I’m beyond excited to be joining one of Australia’s most iconic and agenda driving shows. The Project does news like no other program in Australia and it’s exactly the kind of fun and fearless TV I love to make.

“I can’t wait to share the desk with Waleed, Hamish, Georgie and the rest of the team. I’m excited to shake it up in the new year!”

Waleed Aly said: “She’s smart. She’s warm. She’s great fun. That’s the trifecta for The Project. Everyone who’s worked with Sarah raves about her, and I can’t wait to become one of them.”

Hamish Macdonald will continue to hit the road to report from around the country and bring the weekend energy every Friday and Sunday night from the desk, while reporter and producer Georgie Tunny adds Friday co-hosting to her duties.

The Project Executive Producer, Chris Bendall, said: “Sarah is a journalist and presenter at the top of her game and I am so excited to work with her. Her intelligence, insight and sense of humour makes her the perfect host for The Project as we launch a re-energised show for 2023.

“The Project’s unique blend of news and entertainment is its strength and with Sarah joining Waleed on the desk we will keep delivering the show viewers have come to know and trust.”

Network 10 Executive Producer, Tamara Simoneau, said: “The Project desk has been home to some of this country’s most incredible broadcasters since its inception, so it makes sense that Sarah now joins the ranks.

“Her years on the road as a reporter at various networks and her almost decade-long stint hosting Studio 10 have prepared her for this next chapter in her career. Her warmth, openness and huge heart have endeared her to audiences, not to mention that killer sense of humour. Sarah joining Waleed at the helm of The Project marks the beginning of a wonderful new era for the show.”

The announcement marks an exciting 2023 for the awarded news and current affairs show. A screen staple for over 10 years, The Project is the go-to for A-lister interviews, hot topic takes, cheeky banter and news delivered differently.

But don’t change the channel because there are more exciting announcements to come.