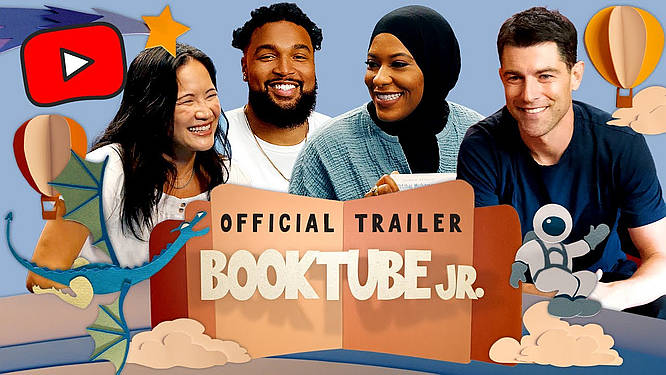 Building on the success of the Emmy Nominated “BookTube,” where viewers saw the world’s biggest authors (President Obama, Michelle Obama, Malcolm Gladwell, Margaret Atwood) come together to discuss their books, “BookTube Jr.” will have the biggest children’s book authors featured in each episode who will talk about their books and their process. They will hear real kids’ questions about their books and inspire them to continue their exploration of the author off-screen. Kids watching at home are also encouraged to tell and create their own stories.

The trailer highlights the series’ eight featured authors. The first four episodes include Joanna Ho (Eyes that Kiss in the Corners), Dr. Ibram X. Kendi (Antiracist Baby), Avery Monsen (I Am the Longest Dog), and Todd Parr (The Kindness Book). The next installment of episodes will air in November and feature Max Greenfield (I Don’t Want to Read this Book), Jon Klassen (I Want My Hat Back), Ibtihaj Muhammad (The Proudest Blue) and Marcus Smith II (Bathtime with Rai).

“BookTube Jr.” is the latest series from an expanding roster of YouTube Originals focused on kids and family, including the award-winning “Lockdown,” and recent hits such as “Kid Correspondent,” “Break the Record,” “Super Sema,” Pinkfong Wonderstar,” “Sherwood,” “We Are Savvy,” “Hyperlinked,” “Fruit Ninja Frenzy Force, “Kings of Atlantis” and “DanTDM Creates A Big Scene.”