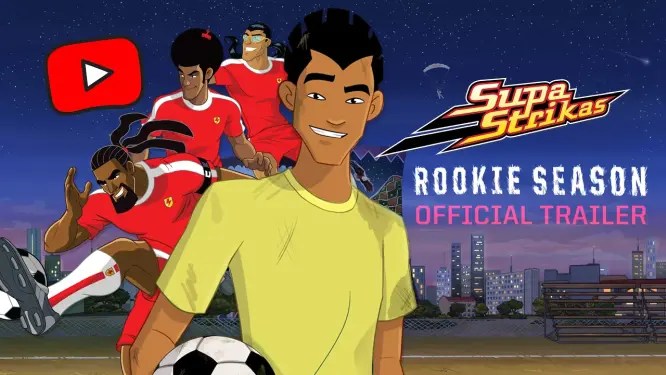 “Supa Strikas: Rookie Season” is the original story of star striker, Shakes, and how he made it to the world’s greatest soccer team, the Supa Strikas! This prequel series that has its roots with a comic book classic launched in South Africa in 2001, uncovers some earth-shattering revelations for fans including the mystery of Shakes’ missing father and how his biggest on-field nemesis was once his best friend.

“Who better to partner with on this project than kids production powerhouse Moonbug and the world-renowned children’s organization UNICEF – both align with our shared values of putting kids and their well-being first,” said Nadine Zylstra, Head of Family, Learning and Impact for YouTube Originals. “We are looking forward to delivering this inspirational prequel to the popular ‘Supa Strikas’ series to the global fans that have been waiting for it.”

“UNICEF is excited to work in collaboration with this much-loved children’s series, which creatively originated in Southern Africa and has then traveled the world,” said UNICEF Regional Director for Eastern and Southern Africa, Mohamed M. Fall. “As we mark UNICEF’s 75th anniversary next month, the partnership around ‘Supa Strikas‘ is another timely opportunity to engage with children and their parents on positive messaging in helping to re-imagine a world with more fairness, equal opportunities, respect for diversity and team spirit.”

“YouTube is a key partner for us at Moonbug. 100s of millions of kids watch our shows on the YouTube platform every single day. And UNICEF, of course as a force for good in millions of kids’ lives globally,” said Andy Yeatman, Head of Americas at Moonbug. “We are thrilled to be partnering with both to bring our audience one step closer to the ‘Supa Strikas‘ origin-story.”

Rookie Season is the kick-off of a closer collaboration between UNICEF and Moonbug Entertainment to develop storylines aligned to the well-being of children as well as fairness, diversity, and healthier living, in an entertaining and engaging show that aims to teach school-age kids (ages 6-12) about the importance of perseverance and following your dreams.

With December 11 marking the 75th anniversary of UNICEF and over seven decades of working for the rights and well-being of all children – the most vulnerable especially – the series pays tribute to the collective accomplishments and continued to push around the rights of children by placing the UNICEF logo on the Supa Strikas match day kit.