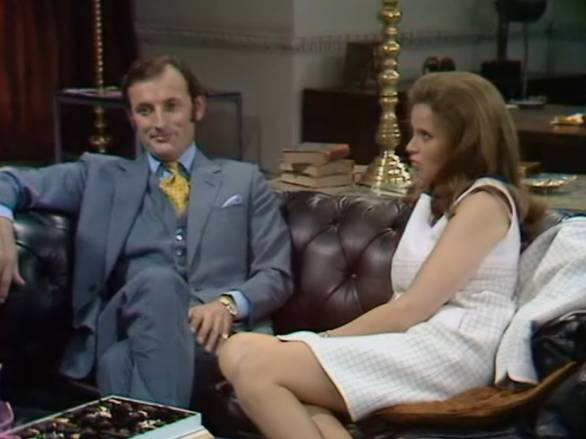 Well to do James Hadleigh was one of the smoothest people on television in the 1970’s, even giving Jason King a run for his money in the urbane stakes.

Growing out of an earlier series called Gazette (this series introduced the character of James Hadleigh and was about the workings of a newspaper that Hadleigh inherited from his recently deceased father), the show focuses on James Hadleigh after he inherits Melford Park and its large and busy estate. Over the course of the series Hadleigh learns how to run the estate, gets married to the beautiful but feisty Jennifer and generally does his best to turn Melford Park into a profitable concern.

The first season continues with the Gazette style quite a bit. Susan Jackson, who was a reporter for the paper, was a major part of the first season. Hadleigh had always fancied her (she was quite a bit younger than him too) and made a play for her as Hadleigh opened. They got engaged during the first few episodes but by the end of the season the affair had fizzled out and Susan had decided to take a job with a London paper.

Season two continued in much the same vein, mid-way through the season James got a new love interest in the shape of Accountant Anne Hepton (played by Jane Merrow). Anne was still married (but separated) to husband Freddy who made a nuisance of himself in a couple of episodes during the season and in the penultimate episode of the season, Breakdown, Hadleigh found himself accused of being the other party when Freddy went for custody of his and Anne’s daughter Charlotte in a bitter divorce case.

The arrival of Jane Merrow to the series was previewed by Ken Irwin in the Daily Mirror, Friday 29 January 1971: Lovely actress Jane Merrow has the kind of looks that would make most men forget their troubles. And that, exactly, is Jane’s intention when she makes her bow tonight in “Hadleigh” (ITV, 9.0). She comes in as the beauty designed to take James Hadleigh’s mind off his business activities. She plays Mrs. Anne Hepton. an ambitious chartered accountant who has a young daughter.

Jane: It’s a very good part, I was particularly pleased to get it because I adore Gerald Harper who plays Hadleigh. We are on the same wavelength and we hit it off extremely well professionally.

This is Jane’s first TV role for nearly two years. She has been busy in films. The highlight of her career was when she landed a part in ” The Lion in Winter” opposite Katharine Hepburn and Peter O’Toole. Jane married an American pilot during a trip to the U.S., last spring. They are living In London.

Jane: We have not decided on the future, We might go back to the States and live there permanently. They seem to appreciate talent more in America than in this country. In America,” she adds, ” they still believe in the star system, and this is important because the general public still want their theatrical idols.”

Season three’s key plot points included Hadleigh and new wife Jennifer getting to grips with married life, including a major argument mid way through the run, the heart of the matter being that there is always something more important in Hadleigh’s life than anything else – Medford Park. Jennifer’s father Charlie also has quite a few run ins with Hadleigh. Quite a few of the storylines are almost stand alone episodes, with a few continuing threads peppered through them, such as Hadleigh and Jennifer wondering about the activities of their mysterious manservant Sutton and Hadleigh trying to help out his god-daughter who is having problems at school.

The lovely Hilary Dwyer decided to quit the series after the third season, according to an article by Hilary Kingsley in The Sunday People (21 Sep 1975) she did not get on at all with Gerald Harper. Hilary had recently had a baby and was abroad. Her agent said “she doesn’t with to be associated in any way with THAT series. Mr Harper and she did not get on.” Diplomatic as always Harper told Kingsley “there was a certain amount of what is politely called creative tension between Hilary and myself, and she certainly didn’t have a very happy time in the programme. As fare as the Hadleigh story is concerned I wasn’t pleased when Hadleigh was married off. “He did make it plain that he was enjoying the new arrangement saying “I must say I am enjoying it immensely now.” Hilary had also recently taken a step back from acting to concentrate on the acting agency she had set up with husband Duncan Heath.

In the fourth season its a time of enormous change for Hadleigh, not only is his marriage on the verge of collapse (and indeed before the half way mark he and Jennifer are divorced), an unseen Jennifer spends much of the season in the United States and it almost looks like Hadleigh could even lose the estate itself. Other key plot lines see James paying a visit to Hong Kong to sell a diamond and also a film company taking over the Hall.

Made for Yorkshire TV Hadleigh is a strong drama series, very typical of the 1970’s, strong plotting and time for storylines to unroll naturally.

Hadleigh had a Rolls Royce and also drove a classy white Monteverdi 3.75l.

Despite very strong feelings on both sides Hadleigh definitely takes Jennifer by surprise when he proposes.