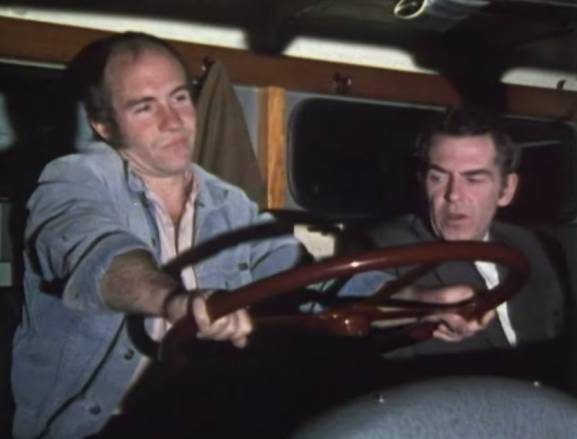 When You Remind Me Someone begins a suit wearing suburbanite leaves home for the day having first made sure all the doors are shut and the phone is off the hook. Later he turns up sitting in the cab of a lorry parked near a cade. He demands a lift off the lorry driver saying he needs to get to Newcastle urgently. The driver isn’t keen but eventually agrees.

Events quickly get sinister as the man clearly has an ulterior motive for being in the truck. He claims his man has been having an affair with a man who looks just like the truck driver!

Meanwhile in cut aways we discover that the man has left his wife lying dead on the kitchen floor. The man then pulls a gun on the lorry driver. When he allows the driver to take a toilet break by the side of the road he shoots him…

Yet again it’s another episode with a final sting in the tale as the man hitches a lift with a typically suburban couple and begins his story all over again, the woman looks like his wife and the man looks just like the man he needs to deal with in Newcastle….

Despite the short running time of these little off-kilter stories they all do superbly well with pacing and scripts. You Remind Me of Someone is economical to the point of leanness but super suspenseful just the same.

Series: The Frighteners Episode 10 of 13