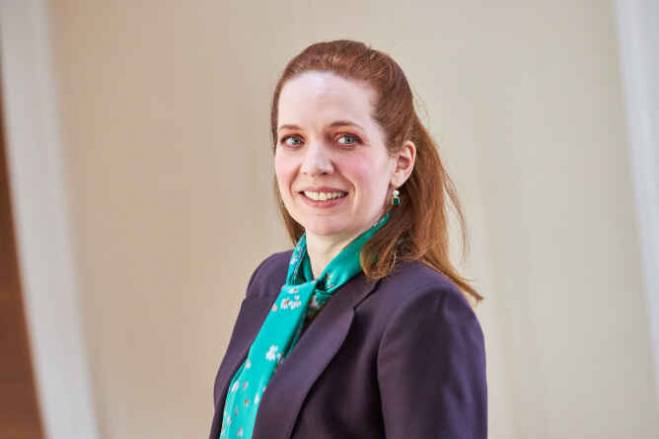 So how did you come to find yourself embroiled in the world of Hitmen?

I’ve always been a big fan of Mel and Sue. I’m old enough (amazingly) to have watched and loved Light Lunch back in the day. I think I must have been a student at the time, but I’ve always loved them. So I wanted to jump in just to work with them alone, but also the scripts are just brilliant. I just thought “Ooh, this is tasty!” I had also just missed out playing a baddy in something else due to quarantine issues, and Kat Gaitskill, who I play as… I probably shouldn’t say she’s a baddy, but she’s a baddy. I just love that combination of comedy and violence. They’re very natural bedfellows.

And this is the first chance you’ve had to work with both Mel and Sue?

Yes, it’s actually the first time I’ve ever met Sue. Mel, on the other hand, came to see me in a play years ago (or she came to see a friend who was also in it), and she actually correctly guessed the gender of the child I was having, just from the shape of my bump. Can’t not work with someone after that. Me and Sue do have a few friends in common so it’s actually quite strange our paths hadn’t crossed before, but I fell hard for them both. They exceeded expectations.

What can you tell us about Kat Gaitskill?

She’s someone who has built an empire. She lives in a huge house with a maze and horses. Very similar to me in many ways. And she’s built it all off the back of this very nebulous self-help, motivational guru business – it’s called something like “Self-Thought”. It’s a bit like Gwyneth’s Goop, but less gross. It was a lot of fun to do as I had to do a photoshoot in character, but I’m a little worried some of those photos will make their way into the outside world and be misidentified as actual publicity stills. Because I look really smug in them. The smuggery is unbelievable. Hopefully they’ve been burned.

Mel & Sue mentioned that Kat has some powerful fashion statements…

Oh did they talk about the kimono? It’s the most beautiful item of clothing I’ve ever seen. I’m really hoping I get to take it away with me. Kat’s a power dresser. She’s a rich, powerful, confident woman and dresses as such. She wasn’t always that way – she started off very shy. But she overcame that and like to wear it on her sleeve, literally.

In the first episode, Kat reconnects with Fran and Jamie at a school reunion, and what follows isn’t too dissimilar to everyday playground politics, but with guns. Do you remember school relationships ever being this vicious?

The guns weren’t there, that’s for sure. I’m very confident with a firearm now. I’ve worked with guns before but never to this extent. It does get said that girls are definitely much bitchier in the playground – we forgo fisticuffs’ in favour of cattiness and backstabbing. In this instance, Kat is completely ignored by Fran and Jamie at school. It’s nice to show a female triangle where they’re fighting over the friendship of another female, I’m not sure how much I’ve seen that. There’s usually a man in the equation. There is a psychosexual element that I’ve been playing, but that wasn’t necessarily in the script.

Have you been wanting to play a femme fatale for a while?

I’ve discovered that I love playing absolute bitches. I have played a total bitch before in Defending the Guilty – I like playing withering high-status characters. I like doing things that are quite heightened, I think. I love actresses like Sarah Paulson – actresses that do high stakes. I loved doing the scenes in the dark where I’d creep up behind Mel with a slightly glazed, medicated demeanour.

You play a lot of dramatic roles, but some people might recognise you most from your roles in sitcoms like The IT Crowd. Do you find the sitcom roles fairly easy to slip into?

Well, different sitcoms have different experiences. The studio sitcom feels totally different compared to the handheld, chaotic sitcom like Pandemonium. But acting with other actors who are comedically very talented is as good as it gets. I like to have a laugh, and I tend to have a laugh more when I’m around people who are very funny – so this has been a really good job. For me it’s all about the variety, so I hope I’m going to be allowed to keep popping up in slightly surprising places.

You’re also well known for your work on stage, but in the last year that’s effectively been shuttered. What has your experience of lockdown been like?

Personally, things have been alright, but that’s more because I’ve gotten better at not spending money. I’ve been fortunate to do bits of work, but like a lot of people, my landscape changed entirely overnight. I was going to be doing a play and a series – they fell through. Then another one. You couldn’t bear to think more than a week ahead. I think actors are used to their landscapes changing, but not to this extent. It’s been scary. I’ve mainly been very upset and frustrated about theatre because it’s my favourite thing to do and it’s a special world to be in. I keep thinking how this would have affected me when I was 25, or even 30. I’m quote old now…

Correct. But I can just about afford to not work for a bit. But I couldn’t have afforded that not long ago. I would probably have gotten out. I would have moved back in with my parents. I would have given in to the relentless “Why don’t you get a proper job?” vibe that I did get up until the age of 30. I think we might have lost a lot of really talented people, and I hope there’s some way of keeping young talents’ dreams alive. I hope the boom that will happen will happen really quickly.

So you’re confident that theatre will bounce back?

I have no doubt. Theatre isn’t just an add on. It’s ancient. It’s atavistic. I really do think it’s rooted deep inside of us. Sometimes I feel like the conversation about the arts treats theatre like the sickly child or ailing elderly relative, but it’s a massive industry that brings in so much money for our country. It’s a robust business. It’s just that the circumstances of the pandemic meant we had to shut. Commercial theatre has really suffered, and I just hope the government steps up or otherwise there will be nothing to go back and see.

So now you’ve spent time getting up to speed with Hitmen, do you feel like you’d make a good contract killer now?

Yeah, I’m thinking about it. The armorer, Ian, said “You really handle that gun well now” and I don’t think he was just saying it. I’ve done jobs before where I haven’t handled weaponry so well, but the character wasn’t supposed to. I really enjoyed firing caps at Mel.

Other than that, did you have any particular highlights from the filming?

I just love the whole vibe of the character. There’s a shot where I’m given a bunch of flowers and I go about trimming the stems, then chop off the heads with a sinister smile. I love all of that. I’ve watched so many of those sorts of shows. I also really enjoyed the reunion party because of the 80’s theme… but mostly firing the guns.