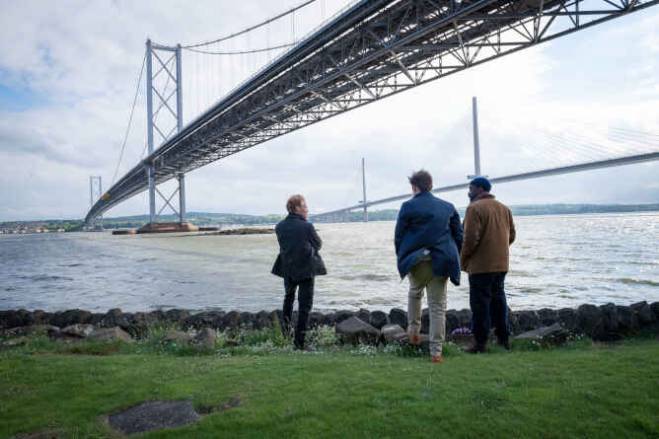 Why did you decide that Val McDermid’s Karen Pirie books would work well on TV?

Most detective dramas on TV are still led by middle-aged men. So as well as big, brilliantly written crime stories, Val’s Karen Pirie novels gave us the chance to put a young female detective at the heart of a big returning series. I’d worked with Emer previously, and she’s a great screenwriter with a very contemporary and characterful voice, so she seemed like the perfect choice to bring Karen to life for TV.

Emer and I were really drawn to the fact that Val had created a character from an ordinary working-class background. Karen is very unselfconscious about her appearance, she doesn’t dress in sexy, Scandi noir suits, but she’s opinionated and smart and funny. She’s often the underdog in a male dominated Scottish police force, forced to fight her corner with her colleagues and superiors.

As a producer, you’re conscious of the audience’s appetite for crime shows, but with each new show you need to offer them something a bit different, something distinct or unique. Here I felt that the character of Karen, the St Andrew’s setting and dual timeline structure gave the show a fresh take that would appeal not just to Val and crime drama fans, but to a younger audience that doesn’t always tune in to Sunday night detective shows.

Was it a challenge to adapt the books for the screen?

The initial challenge was agreeing which book we would adapt first. The issue with the opening novel – The Distant Echo – is that the story is told chronologically, starting with the murder in the past, so two thirds of the book is gone before Karen appears. But we also felt that The Distant Echo was a powerful story that spoke to themes Emer wanted to write about. So we needed to find a way to make Karen more central to the story. We decided the best way to do this was by having two timelines – the story of Rosie Duff’s murder and the failed investigation in the past, interwoven with Karen reopening the case in the present. The structure of moving between the ‘90s and ’21 I think works really well and is one of the strengths of the show.

The Distant Echo was written 20 years ago, and so the novel situated Rosie’s murder in the 1970s. This felt like too big a time jump from our present day (2021) so Emer decided to place Rosie’s murder in 1996, which felt like an iconic year that also created the right gap between the original investigation and Karen reopening the case.

We talked through these ideas with Val at the outset, and while it required a fair amount of reinvention, Val was very supportive in allowing Emer the space to find her own route through the story. It was great that Val backed us, and when we showed her the finished episodes she was chuffed, which was very pleasing.

Why was Lauren Lyle the right person to play Karen?

We’d worked with Lauren on our submarine thriller Vigil, around the time Karen Pirie was commissioned by ITV (early 2019). I thought she would make a great Karen, but I needed everyone else to see her. Lauren gave a great audition and Emer, director Gareth and ITV all fell in love with her, but we still needed Val’s seal of approval. So there was an anxious moment when we sent the link to Val, but thankfully she loved Lauren as much as we did.

I was delighted with the entire cast – once we got Lauren involved and people started reading Emer’s scripts, they were really keen to be involved. As far as possible we wanted to cast genuinely Scottish actors and we got the backing of ITV to aim for a young, often unknown cast. I hope that youthfulness is one of the qualities that will appeal to the audience of the show.

The name ‘Karen’ has taken on a life of its own on social media – did you ever consider changing the character’s name?

We didn’t. For a working-class girl born in Fife in the late 1980s, the name Karen had very different connotations. But Emer was still keen to acknowledge the way Karen’s name had taken on a new significance in contemporary culture. So Karen says to Mint early on, “It’s not been the greatest time to be called Karen”.

We join Karen as she is newly promoted – but she’s uncomfortable with the feeling that she has benefitted from positive discrimination. How do you explore this in the series?

These were themes that Emer brought to her adaptation. Karen is furious with the suggestion that she’s only been given the Rosie Duff case because she’s a woman – as a PR exercise – when she clearly demonstrates she’s the best person for the job. This assumption from her male colleagues triggers Karen into fighting even harder to prove herself. The senior management may have appointed her for cynical reasons (that go to the heart of the story) but Karen proves that they have wildly underestimated her.

It must be challenging to film in a small town like St Andrews?

It was, particularly in the middle of a pandemic, but the town was really welcoming to us. While the main Scottish production base is in Glasgow (which is where we based ourselves) we made sure we had a significant chunk of time to shoot all the key exterior scenes in St Andrews. This was vital – the setting of St Andrews is unique – it’s a university town, which attracts a lot of posh English students, creating a potentially volatile town and gown mix. The story trades on this unique and local setting. But equally Val’s story is universal and -reflected in the amount of interest the show has attracted from international buyers. The best crime stories travel – Val is the master of them, and Emer has adapted this one brilliantly. The trick is to root the story in its unique St Andrews setting, while never losing sight of the story’s universal appeal.

What other production challenges did you face?

Covid was still a major issue for us – we had a couple of delays to the shoot and we had to recast one of the smaller roles before we started filming. The weather was an interesting one too – the novel is set during the winter, so a lot is made of St Andrews in the snow, but in order to deliver the show on time to ITV we had to film in the spring. So we had to change the timeline and hope the weather was then kind to us, which thankfully it was. Finally, we knew we would need two actors to play each character in the two timelines. It was a real challenge to find two actors (in their early 20s and mid 40s) who looked similar enough to be convincing.

Was there any reticence about televising the story of a violent crime against a woman?

It’s certainly something we discussed a lot and Val has always been very clear that The Distant Echo is not a ‘dead girl’ drama. Val, Emer and ourselves discussed at length how to ensure that Rosie was as present in the drama as she is throughout the novel – as a young independent woman, with her whole life ahead of her, not simply a victim of male violence. As for the murder itself, we needed to convey that a terrible crime had been committed against Rosie, but not linger on this. We knew the episodes would partly transmit pre-watershed, so had to take care in what we depicted.

Did you always think 2-hour episodes would work best for this series?

ITV’s had a lot of success in the two hour Sunday night slot, but those shows traditionally tell self-contained investigations across the two hours. ITV suggested that we could tell The Distant Echo as one serialised story across three, two hour episodes – something I don’t think they’ve done since Prime Suspect days.

The more we thought about it, the more we could see the benefits of this longer episodic running time – and the more excited we got. The Distant Echo is a big book with a lot of story that needs six hours to breathe. But with two time lines – in ’96 and ‘21’ – plus the character dynamics and Karen’s relationships, it was difficult to see how all this could be accommodated in 47 minute episodes. The two hour slot gave us enough screentime to cover all this and more. We spend more time with Karen at home, and we’ve been able to develop the relationships with her flatmate River, and with Phil, with whom she has an on-off romance. There’s also the relationship with Karen’s colleague, the Mint, which emerges through Val’s novels but is placed centrally in Emer’s adaptation. It brings humour and pathos and it’s interesting to see Karen being smarter than The Mint, and being equal parts exasperated and fond of her sidekick.

Why do you think we’re so intrigued by cold case dramas?

I think cold case dramas play to our innate desire for justice. We resent the fact that no-one has been caught for perpetrating a terrible crime, and we immediately rally behind the investigator who is trying to bring truth and justice to the victim’s friends and family. I think we’re also intrigued by the reasons why these cases go unsolved, and the intrigue and complexity that surrounds them. Unsolved cold cases are rarely cut and dried.

It’s also a chance to reflect on another era, as a period drama would. Emer made some really interesting observations about the world of 1996 – which still feels contemporary to me but to Emer felt like a piece of distant history! We liked the fact that there was a police investigation in the past, but it was deeply flawed and it’s only in the final analysis that you realise why. And I think that idea of not just re-investigating the circumstances around Rosie’s death, but also re-investigating the way that death was dealt with by the police is one of the key elements of the show.

Have you already started to think about the future of Karen Pirie on TV?

We have. Whether we get to go again will ultimately depend on how well the audience respond to the first series, but we have our fingers firmly crossed.