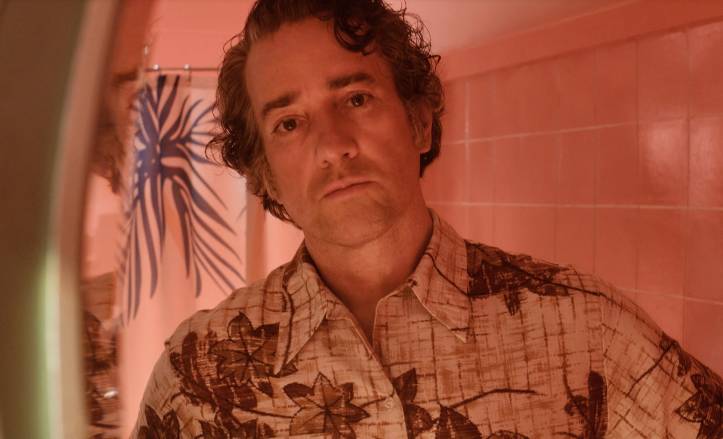 Matthew Macfadyen plays disappearing 1970’s politician John Stonehouse in the upcoming 3 part ITV drama, here he tells all about it.

Did you know about this real life story?

“I was born the month before John Stonehouse faked his own death in November 1974. So I didn’t know much about the story before this project came along. Just a vague memory of something I had read. And I conflated it with the 1970s TV series The Fall and Rise of Reginald Perrin. Although that was based on a novel by David Nobbs and before that his short play written before Stonehouse vanished. “John Preston’s scripts for ‘Stonehouse’ were brilliant. So there was no agonising over whether to take the role. It was such a blast to read. I found it very funny, odd, moving and English. It’s gripping, hilarious and sad. A similar feel to the TV drama Quiz I did in that it’s bizarre. “John is very good at writing perfectly crafted scenes which swing along and are very nice to play. There is also a rather poignant theme running all the way through this involving a boyhood memory that John Stonehouse carries with him when things are going wrong.”

What sort of MP was John Stonehouse?

“The younger John Stonehouse was a bit of a rising star. A bright, self-possessed man. Good looking, charismatic and very personable with people. By all accounts he was a very good MP and at talking to people from different social backgrounds.

“He was a shining light in the Labour Party and became Minister for Aviation and later Postmaster General. Stonehouse was destined for higher things had Labour won the 1970 general election. There was a suggestion that Harold Wilson could have made him Foreign Secretary. “He also did a spot of moonlighting for the Czech Secret Service and went to Africa and did some important work there. But eventually the wheels started coming off.”

John Stonehouse’s wife Barbara is played by your wife Keeley Hawes. How was it being reunited together on screen again?

“We first acted together in Spooks. Then I played a guest role as Gil Hollis in Ashes To Ashes before we played husband and wife in a film called Death At A Funeral. So this was our fourth screen outing together.

“We didn’t really have any qualms about working together again, playing husband and wife. You hope it will be all right because you’re going to work and coming home together. But, of course, it was totally lovely. As natural as breathing. I think something happens anyway when you’re on set. Keeley is a brilliant actress so I’m lost in the scene and working with her. The bonus is that we get to hang out and spend time together.

“In the story as we tell it in this drama, there was real love and affection between John and Barbara and she was very ambitious for John. Barbara was a bright woman and they were a very good team. Keeley and I had great fun with that. Even when John is talking absolute nonsense or trying to dig himself out of a hole, she is always there in the background watching quietly. All seeing and all knowing.

“There’s a line where Barbara says to him, ‘The trouble with you, John, is that you always want to be somebody you’re not.’ You cannot know what his motivations were. But there are parallels with current politicians. A disconnect between them doing their jobs and their idea of themselves. You can spot it more easily now because we have 24-hour media and people are being interviewed all of the time.

“John Stonehouse was also ambitious and not without personal and professional vanity. Barbara also tolerated his roving eye. But, of course, this is a drama. It’s the script we’re shooting and it’s always odd talking about real people. In our story, that’s how we play it out.”

How did he become a spy for the Czech Republic?

“In the story it happened when he was in Czechoslovakia. But I don’t think he was pouring forth an awful lot of critical material. He did it for a while and he was paid. I enjoyed the idea, that we portray in this drama, that he relished the glamour of it. In his mind’s eye he was Edward Fox, Roger Moore – one of those guys in an overcoat with the collar turned up. A case of, ‘Well, if I’m going to be a spy, I might as well enjoy it.’ I imagine he created his own James Bond soundtrack in his head.”

“In the drama he interviews her for the job of his parliamentary secretary and they fall for each other. She was much younger than him. He was a handsome man working in the House of Commons with power and influence. It’s quite intoxicating all of that stuff. It appears that was part of the attraction for her. I think when Barbara meets Sheila for the first time, she very quickly realises what is going on. Or at least has strong suspicions.”

Why did he fake his own death?

“I think it just became too much. It all unravelled. I played it as if he was on the verge of a nervous breakdown. He gets into terrible trouble with money with various different bank accounts and in one scene he dials The Samaritans. Although as his wife later points out once he reappears, if he was having a nervous breakdown he planned it all very well in advance.

“There is an extraordinary scene where he says goodbye to his wife and children and leaves for a business trip to Miami. With them not knowing this was meant to be a final farewell. That was a hard scene to play. Because once you start thinking about it, it’s unimaginable. Very difficult to do. I found it quite moving.

“In our story he obtains a passport to take on the identity of one of his constituents who has died. One of two different identities he took on. With the idea of starting a new life with Sheila in Australia, leaving his old identity of John Stonehouse behind.

“He was only discovered in Australia because somebody thought he was Lord Lucan, a British peer who had also gone missing. Otherwise, he might have got away with it. Who knows?”

Where did you film the scene where he leaves his clothes on a beach and is presumed drowned?

“We filmed that in Malaga, doubling for Miami. The water was very cold. Some of us in wet suits with camera equipment. Some of us without, including me. With wig and sideburns. It was extremely chilly. Fortunately, I am a good swimmer. As was John Stonehouse.

“We had atrocious weather in Spain. Awful storms. The sky went yellow on the last day of filming with all of the sand and dust from the Sahara Desert. We shot there for six days in total and in all but one of those days no-one could get in the water because it was too dangerous. The waves were huge. Then we had one day of weak sun and so we went for it. And I think it works on screen.”

How did he think he would ever get away with it?

“It’s that chutzpah. A sort of vanity, which I found fascinating. ‘I’ll just do it – it’ll work.’ It was much easier to disappear then when none of today’s modern communications existed. Britain and Australia were literally worlds apart. 10

“The only disguise he managed was changing his parting from one side to the other. That was all he did. His teeth were always a bit of a horror show. So I had some fabulous fake teeth for Stonehouse. It’s a lovely prop to have because it makes you feel different. It’s quite a subtle thing that also changes the way you speak.”

Do you think John Stonehouse ever registered the cost to others of what he did?

“My feeling is that he did come to realise the human cost of what he did. But you simply play moments of that and you allow the audience to make their own minds up. Even so, it must have been such an enormous thing to address and contemplate that he might have buried it in his mind.

“When he came back to Britain he was quite brazen about it all. He hung on as an MP before being imprisoned. He did not want to give that job up. The Labour prime minister Harold Wilson had a very slim majority in the House of Commons so he needed Stonehouse to toe the line.

“There is a sadness in this story. John and Barbara had a life together with children which he chose to leave behind. After his release from prison he stayed with Sheila Buckley and had a child with her.”

What was it like working with Kevin R McNally as Harold Wilson and Emer Heatley as Sheila Buckley?

“I had done an episode of Spooks with Kevin 20 years ago. It was really good fun to work with him again. Those scenes were a hoot. Just lovely. Most of the time we were trying not to laugh. While Emer is a total delight. She’s still very early on in her acting career but she was such a brilliant, natural actress and lovely to be with.”

What did director Jon S. Baird bring to ‘Stonehouse’?

“Jon brought huge rigor and enthusiasm with an instinctive intelligence about how to tell a story. I loved working with Jon. Keeley and I had a really good time. He has a great skill, which very good directors have, of galvanising the whole crew. Which is so important. Jon was brilliant.”

John Stonehouse talks about what politics does to some of the people involved in it. Has that changed?

“I think that resonates with events today. I’m sure it’s true of many politicians. There’s no escape, no hiding place. It exposes all of your faults mercilessly.”

If John Stonehouse were alive today, what would you ask him?

“I’d ask him, ‘Why?’ But I sort of know the answer. It’s an irrational thing. And I don’t think he would be able to answer that question. The heart wants what it wants and you’re not able to rationalise things. You just do them.”

You have enjoyed a huge recent success in America. Why did you want to then play John Stonehouse?

“I had filmed the last season of Succession, which was a long one because Covid extended it all. Then Stonehouse came along and I could not turn it down. To go from Succession to Stonehouse is just the best as an actor. Because it’s different. You’re flexing different muscles.

“It was exhausting because it was filming every day with a lot of different make up changes. Our make-up designer Julie Kendrick and the team worked really hard. With different wigs and a time period from the 1960s to the 1980s. So, it was very hard work but I really enjoyed it. I’m very glad it came my way.”