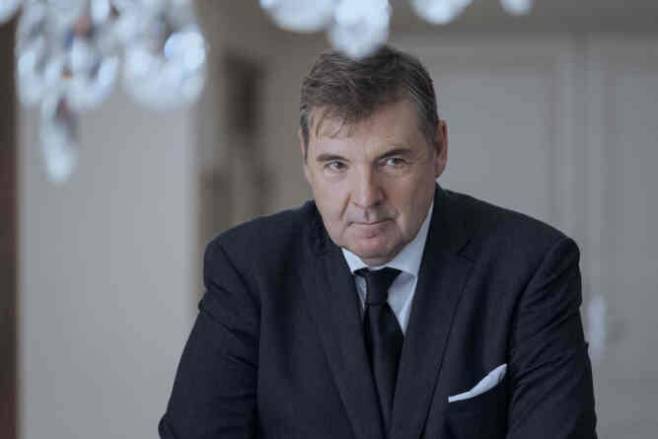 Tell us about Gideon?

Well Gideon is the family lawyer, he’s the executor of Stephen’s will. He is a high flying financial wiz. It is implied that he was Stephen’s right hand man. He was a very loyal general for their financial building up of this empire. He appears ostensibly to be loyal, to be supporting Stephen and Simon and the inheritance of the company. He is seemingly carrying out Stephen’s wishes but there’s something murky going on.

Tell us a little bit about the Flair & Glory empire and Gideon’s role within that?

Well the Flair & Glory empire was established in a very modest way. It’s become this phenomenal success. They tapped into a multimillion selling industry. Some of the guys involved are a little bit more statistical in their business sense but they show great skill and acumen in building this up from scratch and there’s pretty much been nothing like it before, so it’s an extraordinary thing.

It’s a pretty interesting world. You would think it’s a niche world- the world of Black cosmetics and hair products- but it’s a multi-million pound selling business and Stephen and his family have built up this empire through great business acumen and a mass fortune, against all the odds. I think Abby’s take would be it is quite unusual to see Black entrepreneurs you know being so successful against the odds.

It touches on the difference between British Nigerians and AfroCaribbeans and British Ghanaians and it’s just a fascinating one.

Tell us about the relationship that Gideon has established with the Riches family?

So he seems to be trying to act in the best interest of every single character apart from Claudia. With Alesha and Wanda, he is loyal and wants the best for them. Gus is a bit more of a tricky proposition and Andre is a really tricky proposition because he is an interloper, he’s been brought into the firm because of Claudia.

Describe Gideon’s driving force? What keeps him going if anything?

What drives Gideon is the city broker, the thrill of the chase, it’s the attainment of wealth. Considerable wealth and ambition. Ambition that he feels has been thwarted by Stephen and the Riches empire. Abby mentioned something interesting. She said he wouldn’t have been allowed to buy shares. I don’t know why we don’t actually mention that in the script but there’s something about that, that he has felt should have been a lot more money as a result of his contribution to this great empire.

What drew you to Abby’s script?

I was drawn to Abby’s script because I just thought they were fresh, exciting and they offered something new. It was a take on a whole aspect of culture and society that we haven’t really seen. The characters were vivid, alive and engaging and it’s just one of those unputdownable scripts that you read and go: ‘yes please!’

So what do you like about the character Gideon?

It’s an interesting question because we are taught not to judge characters, we are told to understand them. I like everything about Gideon because I am plain. Wherever we behave badly, we find justifications for that and he has his justifications. You know it’s about trying to understand someone and why they behave the way they do.

So what scenes have you found most enjoyable to film?

The scenes I have found most enjoyable to film are my scenes with Deborah Ayorinde and Sarah Niles. They are my main points of contact in the series. With Simon there is a real kind of respect and mutually engaging scenes and then with Sarah who plays Claudia, there’s this antipathy, aggression. So they are all very different and enjoyable. It’s a shame I didn’t get to film with Hugh [Quarshie] because he is just great and because the characters have been set up as having this great history. We didn’t get to express that and I just met him briefly in the make-up truck a few weeks before we started and what a great guy! A class act.

What themes and story elements have been a particular interest for you?

The themes that interest me about Riches are ambition, family fractions in fighting, drive, wealth but also culture. Looking at the culture of a British Nigerian family having made all of this money. And the theme of just stylish, witty, sharp writing and performing. It’s an extraordinary cast. I mean there was Downton Abbey and now Riches, they’re two of the best teams I have played for.

What is Abby like on set and what sets her apart from other directors you have worked with before?

She is very composed. She’s directed one episode so what Abby is like on set is that she is very engaging. She knows her stuff. She cut her teeth over here and she did a lot of stuff in the writer’s rooms that she did in America. You get great notes and it’s just a kind of authoritative, calm energy on set. She knows what works. Darcy and Seb, the two other directors are the same. You know they have done their homework and they have great form and talent.

Would Gideon be welcomed at Downton Abbey?

I think Gideon might fit in at Downton Abbey but not in a favourable way. He wouldn’t be the family banker.. Haha. I don’t know, the cast of Downton Abbey are very welcoming. The characters. I think he would do well, but I wouldn’t welcome him.