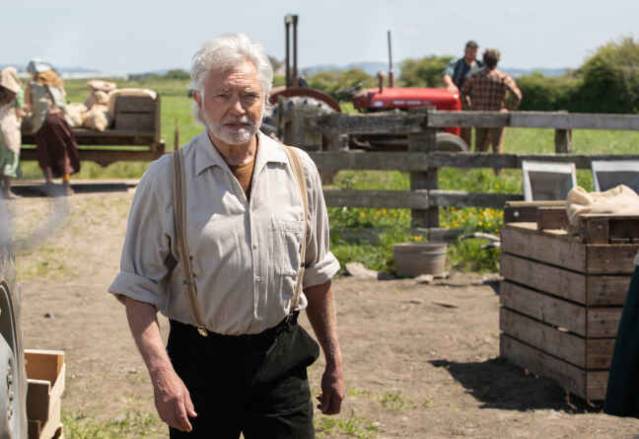 “My agent has always had an extremely high regard for the Director Lee Haven Jones and the Executive Producer Kate Bartlett and had been talking to me about really wanting to put me together with them. When The Long Call came up he called me, almost apologetically because Dennis Stephenson was, essentially, a supporting role, which is not something I have done before. I would be starring in a play in the West End at the same time and so it was going to take a lot of juggling in terms of my time too. But after I read the script and had communication with Lee and Kate it became a no-brainer. I really, really wanted to play this role. And, as it turned out, it was one of the happiest experiences I’ve had.”

And what made it so happy?

“Many things. I’ve been doing this job for well over 50 years and my experience has always been that the overall atmosphere on the production comes down from the people at the top. And if those people are focused on excellence and well-being as Kate and Lee were, it just infiltrates the entire project. Another truth for me is that when women are in charge the experience and the end product are just, well, better.

“And here, aside from Kate, we had Angie Daniell, the Producer, Kelly Jones the script writer, Ann Cleeves the original author. It was like a surge of wonderful female energy.

“Aside from that, there was the joy of working with Ben Aldridge who led the company so well, and with the entire cast, including Juliet Stevenson who I’d last worked with 30 years ago and who I was able to pick up with as though it had been yesterday. And, of course, there was the role too. Dennis was exactly the kind of interesting character that I love to play.”

“Dennis is the leader of a religious cult known in our story as the Barum Brethren. It’s a fictitious cult although, in reality, there are various sects of the Brethren that exist today in the UK and further afield. They live by teachings of the Bible in a very absolute kind of way. They run along the principle of removing themselves from modern society and avoiding what they consider to be the worst things of that society – from mobile phones to televisions.

“Basically, I believe that Dennis is a good man although he is utterly fixated with the world view of the Brethren and with the continuation of the sect. I think he started with the best intentions, but as often happens with leaders of religious cults his ego now dominates and threatens to destroy everything.

“I don’t see him, though, in terms of black and white. He’s a complex character and the challenge was to portray those complexities and to get people wondering what Dennis is all about.

“There’s nothing more boring for an audience than knowing everything about a character in the first ten minutes, so my aim was to have them constantly shifting their view. One minute you think you have him sussed, the next, you’re not so sure.”

How would you describe the relationship between Dennis and his wife, Grace (Anita Dobson)?

“Dennis is very controlling. But then it’s the nature of extreme religions to be male- dominated, and Dennis and Grace exist in a world where male dominance has a sense of righteousness attached to it that makes it seem the correct way of things. It’s accepted as something that God intended because, of course, God is a man and Jesus was a man. So, anything that we do as men has got a religious, righteous force behind it. There are certainly religions out there that are even more oppressive and cruel than this one but, at the same time, the Brethren is about women having a subservient role which they accept and go along happily with. In the case of Dennis and Grace, though, the control has become so great that the pressure is building to unbearable levels. You can’t help predicting that bad things could happen as a result.”

What was it like working with Anita Dobson who plays Grace?

“It was wonderful. On screen we had some extremely difficult scenes together because of the dark nature of that relationship and you could easily have carried the atmosphere of those scenes around with you. But the great thing about Anita is that she also has this extraordinary sense of mischief so that, having given a splendid, nuanced and often very disturbing performance on screen, she could then snap out of immediately when the cameras stopped rolling. We had a lot of laughs off camera and a really funny time together.”

Did you do any research into the Brethren?

“Yes, I did, although It’s quite difficult to research the Brethren because, by its very nature, it’s a closed society. I did watch a documentary about the Plymouth Brethren that Lee recommended with the caveat that, because it had been made by the Brethren themselves it wasn’t likely to show the darker side. It was helpful though and Kelly’s script supplied the rest.”

You have a mystical side yourself as a long-time devotee of Charan Singh and the Sant Mat religion. Did that help when playing Dennis?

“Not really. The two of us and our beliefs are very different. While both Dennis and I do both believe in a higher power, the path I follow is all about discriminating between the good and the bad that we can do as human beings. At his core, Dennis has religious devotion but he lacks the discrimination to put it into practice in a way that doesn’t hurt people. That would be the reverse, hopefully, of what I aim to be.”

What was the biggest challenge of the role?

“The most challenging day was when I had to be up to my waist in a very cold sea in North Devon for a scene in which Dennis is baptising somebody into the Barum Brethren. It was blowing a gale, with torrential rain for the most part, with the occasional ten minutes of sunshine. What represents 30 seconds on screen took maybe four hours of filming, by which time I was literally shaking all over with cold. Maybe it’s to do with ego or a complete unwillingness to accept my limitations but every time Lee said to me, ‘Do you think you’ve got one more take in you?’ I’d be like, ‘Yeah, come on. Let’s go!’. It was uncomfortable but also enjoyable and exhilarating. In those situations, I just see myself as a bit invincible. Nothing can hold me back.”

How was it filming The Long Call through the pandemic?

“Filming under strict Covid restrictions was a whole new experience for all of us. We all had to do PCR tests – the ones that get sent to the laboratory – two days before being on set and every day we had to fill out a questionnaire before we could get a pass to get on location. Then, when you arrived, there would be someone in a mask to take your temperature with one of those thermometers they aim at your head. It was pretty full on.

“I have deep respect for all the crew because they had to wear masks all day, come rain or shine and I don’t think I could have done that. It was strange occasionally to see one of them outside without a mask on. You’d think, ‘Oh, that’s what you look like!’”

Did you enjoy filming in North Devon?

Yes, very much although we were in Bristol for a large part of the time because it was where all the interior scenes were filmed. The last three weeks though were in North Devon which viewers will be able to see is a truly stunning part of our country.”

You famously played George Gently in the British cop show, Inspector George Gently. How does The Long Call compare?

“Very favourably and, for me, it moves the genre on. On the one hand, The Long Call is a police procedural but it also has so many other levels and is a rich character driven piece too. It poses questions about modern society and consumerism, it tackles the theme of female emancipation, it looks at relationships and the rejection of someone who has been bold enough and brave enough to announce their sexuality within a society in which it’s simply not allowed. So, there is a lot of emotion and complex social issues being explored here as well as the detective format. It was one of the things about the experience that excited me most.”