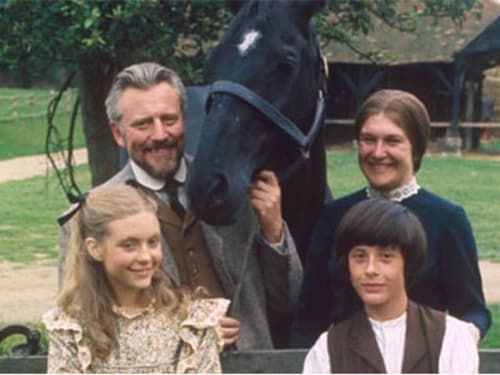 Period children’s adventure series. In Victorian times the young daughter of a doctor has a magnificent horse called Beauty and together the pair get mixed up in adventures.

Extremely loosely based on Anna Sewell’s classic novel (which was made into a Mark Lester starring movie around the same time as this) The Adventures of Black Beauty is one of the best remembered family TV shows from the 1970’s.

When the series begins it is 1877 and young Vicky Gordon, daughter of the newly arrived from London doctor in the village of Five Oaks, takes in a horse (she christens Black Beauty) after she sees it being brutally treated. Like the similar but modern day Follyfoot Adventures of Black Beauty tackles a different story each episode with the emphasis on adventure naturally enough.

Judi Bowker who had the lead role of Vicky bowed out after the first season of 6 episode, she was replaced by Stacy Dorning as her sister Jenny who had somewhat conveniently been away at boarding school during the first season. Scampish cousin Ned was also brought on board for the second season.

The series is equally as remembered for having one of the stand out TV theme tunes of all time (Galloping Home by Denis King which even reached number one on the UK charts). In the mid 1990’s there was a surprise antipodean (New Zealand) revival called The New Adventures of Black Beauty which featured both Dr Gordon and a now married Jenny (best of all William Lucas and Stacy Dorning both reprised their roles).

As befitting a popular junior series like this there was plenty of merchandising released from novelisations to annuals (a few that came out in the late 70’s were not based on the series though).

The series was the brainchild of producer Ted Willis but the superb Richard (Catweazle) Carpenter provided many of the scripts as did the likes of Victor Pemberton and David Butler.