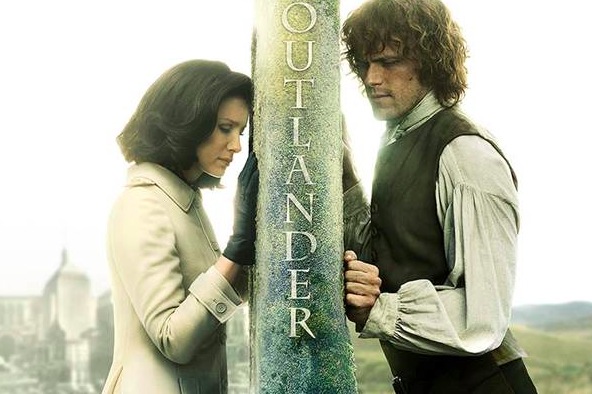 Outlander follows the story of Claire Randall, a married combat nurse from 1945 who is mysteriously swept back in time to 1743 Scotland, where she is immediately thrown into an unknown world and her life is threatened. When she is forced to marry Jamie Fraser, a chivalrous and romantic young Scottish warrior, a passionate relationship is ignited that tears Claire’s heart between two vastly different men in two irreconcilable lives.

The new season picks up right after Claire (Caitriona Balfe) travels through the stones to return to her life in 1948. Now pregnant with Jamie’s (Sam Heughan) child, she struggles with the fallout of her sudden reappearance and its effect on her marriage to her first husband, Frank (Tobias Menzies). Meanwhile, in the 18th century, Jamie suffers from the aftermath of his doomed last stand at the historic battle of Culloden, as well as the loss of Claire. As the years pass, Jamie and Claire attempt to make a life apart from one another, each haunted by the memory of their lost love. The budding possibility that Claire can return to Jamie in the past breathes new hope into Claire’s heart… as well as new doubt. Separated by continents and centuries, Claire and Jamie must find their way back to each other. As always, adversity, mystery, and adventure await them on the path to reunion. And the question remains: When they find each other, will they be the same people who parted at the standing stones, all those years ago?

Resuming their roles from season two are Sophie Skelton as Brianna Randall and Richard Rankin as Roger Wakefield, while new cast members to be introduced include David Berry as John William Grey, César Domboy as Fergus, Lauren Lyle as Marsali MacKimmie, and John Bell as Young Ian Murray.

Berry’s character Lord John is a steadfast and honourable British subject, torn between a finely-honed sense of familial duty and a strong moral compass of right and wrong. He is boyishly handsome with an upper class rearing — the consummate gentleman. However, a scandal from his past has relegated Lord John to an undesirable position as governor of a desolate prison in Northern Scotland and an unrequited love makes him a prisoner of his own passion. 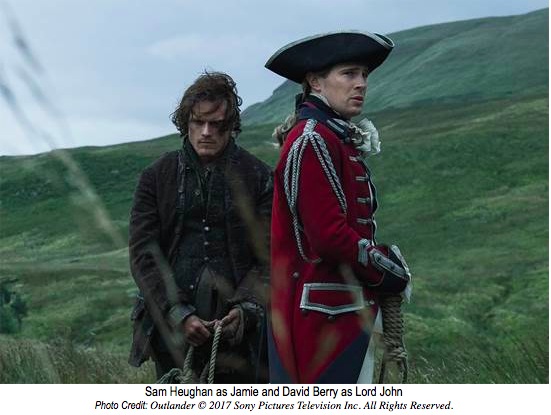 SEASON FOUR 4 November 2018 – 7 January 2019
1 – America the Beautiful | Airdate: 2018-11-04
Claire and Jamie cross paths with Stephen Bonnet, a pirate and smuggler who enlists their help. Claire illuminates Jamie on some of America’s history, leading him to wonder if it’s possible for them to lay down roots.

2 – Do No Harm | Airdate: 2018-11-11
Claire and Jamie visit his Aunt Jocasta at her plantation, River Run. When tragedy strikes at the plantation, Jamie and Claire find themselves caught between what’s right and the law of the land.

3 – The False Bride | Airdate: 2018-11-18
Jamie and Claire search for a place to call home. Meanwhile, in the 29th century, Brianna and Roger’s romance heats up and then fizzles during a road trip that winds up highlighting their differences.

4 – Common Ground | Airdate: 2018-11-25
Having been led by providence to Fraser’s Ridge, Jamie, Claire and Young Ian begin to build a home in the Blue Ridge Mountains. In the 20th Century, Roger tries to reconnect with Brianna.

5 – Savages | Airdate: 2018-12-02
Claire’s medical expertise proves invaluable, but she begins to fear for her life when tragedy strikes her patients’ household. Jamie and Young Ian travel to a nearby town to recruit settlers for Fraser’s Ridge.