When James Bond became a box-office sensation in the 1960’s, producers around the globe scrambled to capitalize on his profitable exploits. This led to a wave of spy adventures that blanketed both the big and little screens during the mid-1960’s. Many of these shows relied on gadgets and flashy visuals, but a few took advantage of this craze to do something interesting and different. The definitive example of the latter approach was I Spy, a classic show that downplayed spy show conventions in favor of characterization, humor, and great dialogue.

I Spy focused on Kelly Robinson and Alexander Scott, two Pentagon agents who traveled around the world on an undercover basis as they carried out their missions. For their cover, Robinson impersonated a tennis player and Scott pretended to be his trainer. The two men were a study in opposites: Robinson was a party-hearty guy who loved to enjoy the ‘good life,’ while Scott was a no-nonsense character with a strong sense of devotion to his family. Just the same, these two worked very well together because they shared a very dry sense of humor that often manifested itself in the form of snappy banter.

I Spy was unlike the traditional spy show in many ways. Instead of confining its shooting to studios, this series was shot mostly in distant locales like Japan and Turkey. I Spy also downplayed comic-book plotting and over-the-top supervillains in favor of premises built around realistic espionage situations like industrial sabotage and the theft of state secrets. Most notably, I Spy was the first American television show to feature an African-American actor in a dramatic lead role. Even better, the show did not acknowledge the race issue, depicting the friendship between the two men in a subtle, matter-of-fact fashion.

The interracial casting used in I Spy was indeed a brave gamble on the part of the producers, but it was also a gamble that paid off in a big way. Stand-up comedian Bill Cosby not only proved himself to be an excellent dramatic actor as Alexander Scott, he also brought a lot to the show with his ability to improvise subtly funny dialogue. Indeed, Cosby and his slick co-star Robert Culp (Robinson) had a magical chemistry that allowed them to trade memorable quips with ease. A sample exchange:

Scott: “Has anybody told you look good in that?”
Robinson: “Why, no.”
Scott: “Well, if they do, smack them in the face ’cause they’re not your friend.” 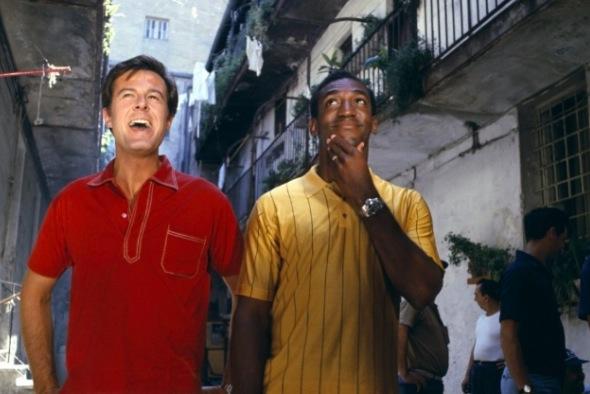 These clever verbal duels were often improvised by Culp and Cosby, adding an additional luster to the show’s already well-written scripts. The combination of high-class style and Cosby and Culp’s infectious chemistry turned I Spy into an immediate hit. It went on to enjoy a successful three-year run and also won several awards, including a Best TV Show Award at the 1967 Golden Globes and two Emmys for Cosby. When the show ended, both Cosby and Culp went on to lengthy film and television careers that continue today. Most notably, Cosby scored a career-defining hit in the mid-1980’s with the legendary sitcom The Cosby Show.

Today, I Spy remains a firm fan favorite. It has not popped up in syndication as frequently as some other shows from its era, but when it does, it is eagerly watched by a cult of faithful devotees. The show’s enduring status as a classic also led to the 1994 reunion television film I Spy Returns. All in all, I Spy’s ability to maintain its status many decades after the fact proves that it was truly a spy show with a difference.