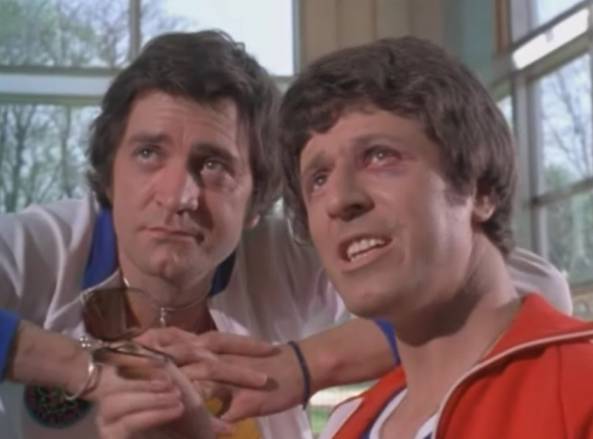 In Golden Fleece a pair of thieves are breaking into the houses of wealthy couples and robbing them at gunpoints. The only clue is that one of the pair appears to be Australian. They also seem to have inside knowledge on the people they are targeting. When they think Haskins is getting too close to how they are getting their information they decide to put him out of action by using local villain Wally Vince to set him up with A10 on a fake corruption charge.

With Haskins on suspension Regan and Carter have to do a little investigating of their own to try and clear his name. It doesn’t take long to discover that all of the victims had purchased Krugerands from a London clearing house called Warburtons. However unusually for the Sweeney the Aussies manage to get away. Wally Vince also does a runner abroad to Canada meaning the case against Haskins has to be dropped.

Patrick Mower and George Layton are the two Aussies Colin and Ray, complete with terrible Aussie accents and drinking copious amounts of Fosters. But it’s a fun dynamic between the pair though.

George has now moved from the home he had with Alison and is living in a basement flat.

Haskins is set up by Wally Vince and arrested by Philip Madoc as Inspector Pettiford of A10.

The TV Times for the week had a nice two page feature on former Special Branch star Patrick Mower, focusing on the sporting aspect of the character he plays in this episode.

Besides Mower and Layton there is excellent support work from Anne Stallybrass as Doreen Haskins, Madhav Sharma as the dodgy Earle and Cheryl Kennedy as his assistant. Philip Madoc also has a prominent role as Pettiford, the brusque A10 investigator.

There was a connection with another Thames classic in this episode too with Michael Latimer and Martin Wyldeck, who both worked on the first two seasons of Van Der Valk together.

Cheryl Kennedy as Judy Collier is the key link between Colin and Ray and Warburtons.

classic quote
“Right Mr Cowley, your money or your wife… On second thoughts we’ll just settle for the money.”