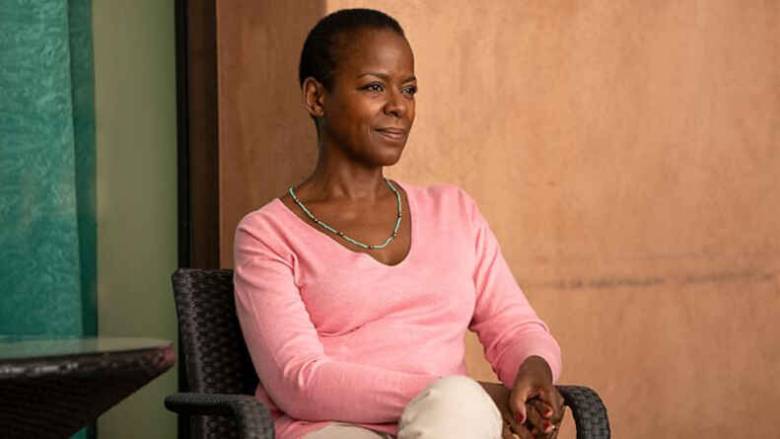 Tell us about your character, Miriam?

Miriam is Jo’s oldest friend and is married to Ben. She and Ben have been married a long time and they are a very close couple. They’re the only one of this group who doesn’t have children. She’s a GP. I would say, and I think the others would agree, that she’s the quietly brave one. She’s very on top of her game.

Do you remember your first impressions when you read the script?

Oh I’ll remember it forever. It doesn’t matter how far back. I got the script. I could not put those scripts down. I remember they were couriered over to me and it was quite late and I was doing something the next day. I thought that I’d read the first episode and then I’ll read the rest of it later. My heart was beating out of my chest when I read it and I got to the end of each episode and I had to go on to the next. In fact, I stayed up and read the entire thing because there was no way I could stop reading once I turned that first page.

What did you find appealing about your character when you read the scripts initially?

What I found appealing about Miriam was that she is in some ways, not as fractured as some of the other characters. She is someone you would absolutely and deeply trust. She’s somebody who you would confide in. She’s somebody who’s advice you would seek. However you can also have a laugh with her. She’s quite rounded; very centred, caring and funny.  The depths that she goes to and the qualities that you see in her as Crossfire unfolds is fascinating.

The story explores the characters and their lives through flashbacks and flash forwards. Could you tell us more about what this adds to the story?

The great thing about having flashbacks is that you see things that happened before and leading to the event, you get to see other sides of people’s characters before you see them battling the horror of the story. It’s really important because so much of the story is incredibly intense and you are on the edge of your seat. It’s nice to see them in normal situations, having a laugh with each other and you get a fully rounded sense of all of these characters. Then you also get to see them afterwards so it’s a full picture.

What do you think audiences will relate to in crossfire?

I think what audiences will relate to in Crossfire is the fact that it’s a very familiar situation. Every single person who watches this programme, whoever they are, how old they are, whatever the situation they’re in, will be able to relate to going on holiday. Either a cheap package holiday or something more expensive. You’ve got your sun lounges, you’ve got your pool, the bar and café.. It’s a recognisable situation. So anyone watching it will be able to see themselves in that situation.