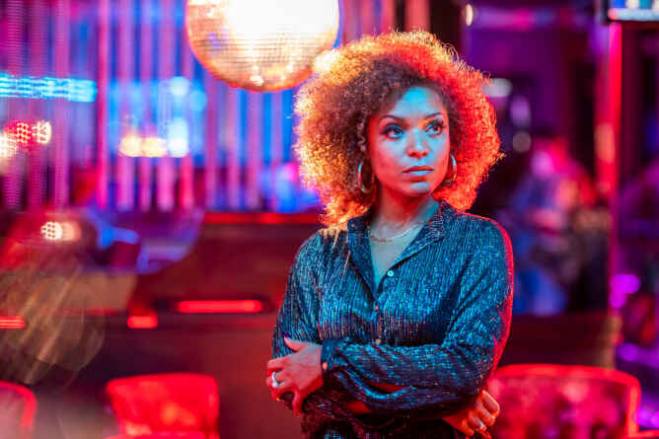 Why did you want to do Suspect?

The script came through and it seemed so mysterious, cryptic and intense. Then I got more context about the rest of the storylines, and when I realised it was a two-hander with James Nesbitt, it was just a complete no brainer.

Why did the two-hander aspect appeal?

It’s a challenge that I have never had before, especially on screen. And this storyline means there are no bells and whistles, it’s just talking, subtext, what people are and aren’t saying, what they’re trying to cover, how they’re trying to get one up on each other. It’s really exciting and scary to map a piece like this, then navigate your character through it.

How did filming work?

It was quick, but extremely immersive. We rehearsed it all day in situ, really plotting it out, essentially like a play. Dries (Vos, director) played it in really long takes, and marrying the theatrical experience with a camera was just a dream.

Where did you film it?

In a functioning club in west London, near Hammersmith, which gave it a real authenticity and grit. It really informed Maia for me, because having to be in there, with that lighting and the seediness, all day long would definitely have an impact… And we found some interesting things in the dressing rooms!

We know very little about her at first, although she has been a friend of Christina’s (Imogen King) since they got introduced to one another through the party scene. Maia has played the older, protective confidante role for Christina, who has been in a complicated relationship with her partner, Nicola (Niamh Algar). It hasn’t been right, in some ways: Maia sees Nicola as very controlling, so she has been a sounding board for Christina. But drugs are involved in their world, and they get involved in a business deal that goes wrong.

Is Maia used to people making assumptions about her?

Yeah, in a very, very toxic male environment. But she’s also a single mother doing what she has to do. She’s hardened by life. When Danny comes into the club, she’s used to dealing with men like him, aggressive and trying to assert authority. Then she’s quickly on the back foot because she realises that there’s more to him than just a random guy and she doesn’t know why Christine is dead. From then on, it’s a balancing act: she doesn’t want to implicate herself or say too much, because she just doesn’t know where it’s going to lead.

I think so. She knows Christina is a tough cookie who’s been through a lot and has been involved with some dodgy stuff. Maia doesn’t want to get dragged into it because her kids are her priorities, so her survival instincts clash with the humanity of being a mother in front of this man who’s just lost his daughter. Slowly but surely, she gets pulled in.

How was James Nesbitt to work with?

We’d worked together with Sacha (Dhawan, playing Jaisal) years ago, on The Deep, which was my second-ever job. I was very green and it felt quite overwhelming, but Jimmy took us under his wing and we all got on really well. When the opportunity came round to work together again, I was thrilled. It’s just a shame that the three of us don’t get to be in the room at the same time.

How did you work on your scenes together?

I was nervous because I’d never done something of this nature before and I wondered if he’d remember me. Instantly he was like: Oh my God, how are you? I felt completely comfortable so we just got stuck into the work. He’d already done a few episodes but he still had all the energy to go at it. He was an incredible scene partner, and it all had so many layers. Each episode is a cat and mouse game of one upmanship, where as soon as one character thinks they’ve got themselves into a strong position, the rug is pulled and another piece of information is revealed.

I have something very exciting that I’m going to be filming at the beginning of the autumn, another two-hander but in a very different format – a British comedy with an actor that I hugely admire. I’m also doing quite a bit of writing as well, trying to develop stuff myself.