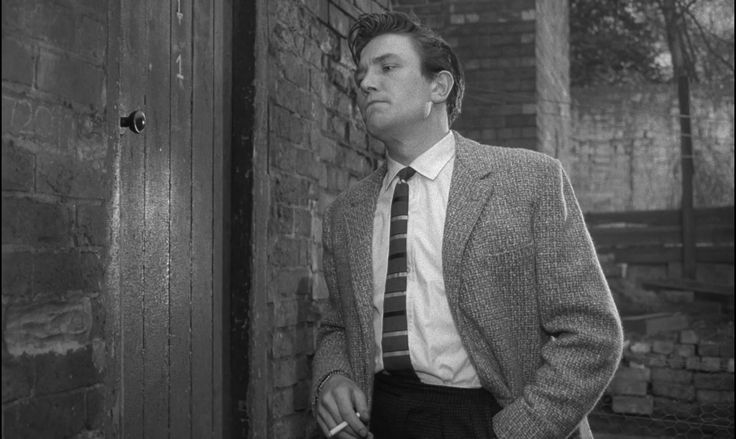 Neither before or since has British cinema been so electrifying as it was in the late 1950’s and early 1960’s when Room at the Top kicked off a new wave of realism that brought a sense of urgency and social awareness as well as a revivial of interest in British cinema after a decade in the doldrums.

The rise of “kitchen sink” realism (as it came to be quickly called) coincided with the rise of the teenager and young people in general learning that the older generation didn’t know it all, at the same time there was a rise in social and political demonstrations and ideas were everywhere.

The roots lay in the working class, social realist novels of authors like John Braine, Stan Barstow and Alan Sillitoe and on the theatre stage – the original angry young man John Osborne whose play Look Back in Anger had ignited a trend.

On screen The Man Upstairs (1958) could be said to be the first new wave film with its tale of the residents of a London boarding house but it was Room at the Top the following year that really caught the audience imagination. Based on the novel by John Braine and starring Laurence Harvey the movie pulled no punches in it’s depiction of life in a northern town.

Now it can be seen as something of a transitional film, but it certainly made an impression and paved the way for film-makers such as Karel Reisz, Tony Richardson and Lindsay Anderson, all then ensconced at the National Film Theatre, to begin making inroads – at the time all were making social documentaries that were beginning to be noticed with features the next natural progression.

First to make the breakthrough into features was Tony Richardson who brought Look Back in Anger (1959) to the big screen having already directed Osborne plays on the stage. Richardson and Osborne formed their own production company, Woodfall, and had major hits with both Look Back In Anger (which starred Richard Burton) and Saturday Night and Sunday Morning. Released in 1960 and directed by Karel Reisz the film starred Albert Finney and garnered acclaim and controversy in equal measure – never before had such a casual attitude towards sex and the nature of living for the weekend been so visible on screen.

Overnight the success of these movies changed British cinema forever – for the new vanguard of film-makers it was all about shooting on location, the grimier the better and eschewing the star name for the up and coming. Real life was the order of the day.

A Taste of Honey (1961 and again directed by Richardson for Woodfall) and The Loneliness of the Long Distance Runner (1962, Richardson again and a star making turn from Tom Courtenay) were also both major hits.

Meanwhile Lindsay Anderson only entered the fray in 1963 with the mesmerising This Sporting Life with Richard Harris as the troubled Rugby League player. Despite critical acclaim it wasn’t a major commercial success and hampered Anderson’s chances of getting a second movie made (something that only happened several years later with IF.)

Around this time John Schlesinger also made a name for himself as director of A Kind of Loving (1962 and starring Alan Bates) and then Billy Liar (1963 with Tom Courtenay and Julie Christie who still a couple of years away from proper stardom in the film Darling.)

By 1963 well over a third of the films made in the UK were about contemporary life and although it could be considered the golden year for the “genre” it was the year that also spelled it’s death knell and the man who brought it down was one of it’s guiding lights – Tony Richardson.

Richardson had decided to make a lavish, colour version of Swift’s novel Tom Jones. Unable to raise the finance in the UK he persuaded US studio United Artists to invest – the massive critical and commercial success of the Albert Finney starring movie meant that American studios were all over the UK with plenty of money to spend. Glamour was quickly back on the agenda. Meanwhile “kitchen-sink” realism found a natural home on television with the likes of The Wednesday Play and the later but just as influential Play For Today.