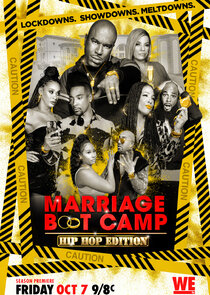 Hip Hop Edition: All Lies On Me – Hip-hop couples face the lie detector; A night in the club brings surprising temptations.

This season on Marriage Boot Camp: Reality Stars, a breaking tabloid scandal rocks the boot camp as five famous couples fight to save their broken relationships. For Kendra Wilkinson & Hank Baskett (Kendra on Top), Marriage Boot Camp is their last hope to repair a marriage devastated by Hank’s alleged infidelity with a transgender model. Famous flirt Mike "The Situation" Sorrentino is struggling with the issue of addiction and facing jail time for tax fraud, while his college sweetheart, Lauren Pesce, is waiting patiently on the sidelines. The specter of relapse and jail time is putting the pressure on these two to call it quits. Aubrey O’Day & Travis Garland (Making the Band, Celebrity Apprentice), are jealous lovers who’s emotional-rollercoaster-relationship is more toxic than ever. Tami Roman & Reggie Youngblood (Basketball Wives), struggle to stay on the same page with a 17-year age difference. He wants to get married and have a family. She doesn’t. And Jeff Schroeder & Jordan Lloyd (Big Brother) may look picture-perfect, but their relationship is far from it and now is on the line.

Boot Camp directors Jim and Elizabeth Carroll, joined by co-directors Ilsa Norman and David Bishop, are up against the most explosive and challenging Marriage Boot Camp, yet, with high octane drills such as a shotgun wedding and pulling the plug on someone you love. In the end, the reality stars will be forced to make a final decision; is their union worth saving or are they better off apart? And when secrets and lies are finally exposed, it leaves everyone shocked and futures in doubt.