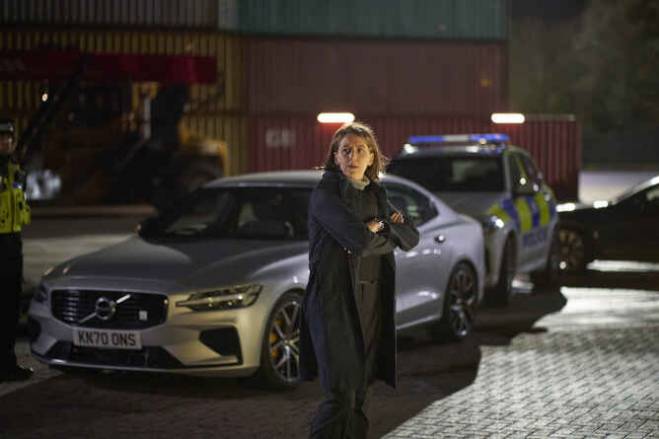 How did you come to write DI Ray?

I’d written episodes of shows like EastEnders and Ackley Bridge, but I was mainly acting and I didn’t have any formal writing training. I didn’t even go to university, because I trained at LAMDA. Then Jed [Mercurio] called me while we were filming Line of Duty together, to discuss killing off my character in series five. During that conversation he told me he’d set up his own production company and he knew I was writing scripts. He said he’d love to support me and develop a project together.

I’d always wanted to write about girl gangs in Birmingham, so we tried to pitch that show to various places but nobody was quite ready for it. Then I told Jed I’d always wanted to write about identity, because it’s such a big thing for me and for so many people, but I didn’t know how to reach an audience with that subject matter, because it’s quite niche. Jed said I just had to make it accessible to people, and suggested wrapping it up in a police procedural, because there aren’t enough of them! That’s where the idea came from, then we pitched it to ITV and it all happened so fast.

The series was commissioned on a momentous day for you, wasn’t it?

Yes, my lockdown was so busy because I literally got the script commission for the first episode on the day that my daughter was born. I was like, “Oh my goodness, I’ve got a new-born, a four-year-old son at home and a script to write!” But you work so hard to get your own show, I wasn’t going to let anything get in the way. I breastfed on Zoom meetings, but it was one of those things – if you want a job done then just ask the person who has no time, they know how to prioritise! Also, when you’ve got limited time you don’t procrastinate too much, you just have to do it and keep working. I did do a lot of drafts for the first episode, trying to work out what the show was.

How has Jed helped you develop the show?

It’s been amazing working with him. My strength is dialogue, but I’m not really too good with story, whereas he’s so good at plotting things, and at twists. I could just write two people talking in a room for hours, but I’ve learned so much from Jed about how to hook in audiences and keep them watching. There are probably a few ‘Jed influenced’ plot twists in there – not red herrings, or “Jed herrings” as we call them, but hopefully a few surprises.

Being an actor does help with dialogue because I feel like I have an understanding of how people really speak. I’ve read scripts before where I think, “Nobody would actually say it like that, that’s not how people talk!” and you know that when you struggle to learn lines it’s usually because they’re not written well. It’s story that’s harder for me, so it’s great to have Jed asking me what’s happening to drive the plot on.

How did you feel about researching and writing a police story?

I panicked big time when Jed and I first talked about it, it’s so out of my comfort zone, I didn’t know anything about this world. Thankfully we had two amazing official police advisors and then I’ve also got my brother’s mate, who is a detective in the Met, who I could just ring and text at all hours, which was amazing. I learned from them about the procedural elements and I worked really hard to try to get the police stuff right. I didn’t want to write a rubbish Line of Duty!

I also wanted to keep my sense of humour in the show and find the comedy moments, even though we go to quite dark places. I still wanted to keep the lightness and warmth.

How would you describe your lead character, Rachita?

She still hasn’t dealt with her identity yet, even at this age, and it has brought a lot of shame for her, because identity and shame are inextricably linked. If you’ve not grown up feeling proud of who you are, then you hold a lot of shame and guilt. She has never really fitted into either world and she holds onto that. I have absolutely lived her experience, struggling with identity and I can totally write that from truth.

She’s also got a great sense of humour, she’s quite dry. She’s very hard working and good at her job, and her team comes to realise that she is a very good leader. It was important to me that she wasn’t that TV detective getting drunk all the time, not looking after herself. She’s not a young cop trying to prove herself and I wanted to reflect that this is someone in her early 40s. She’s got issues going on concerning her identity and feeling out of place, but I don’t think we need to have a broken individual at the head of every single crime drama.

As an actress, weren’t you tempted to cast yourself in the lead role?

This was such a massive project to get done, I literally wouldn’t have been able to act in it as well. Parminder was in every scene and I’m so grateful to her. Physically, I wouldn’t have been able to do it all, but also Parminder brings something new to the show and can look at it with different eyes. She’s a much better actress than me! She’s just so captivating as Rachita and you really root for her, she was absolutely the right person for the role and I’m so chuffed. It worked out so well, because Parminder is from Leicester originally and I wanted Rachita to be from the Midlands. I was worried we wouldn’t get her over from LA, but she came and she smashed it. She is just a brilliant human being and the best person to head up this show.

I also wanted breakthrough talent to be in it. We’ve got brand new Brummie actors who are so good, and I’m so excited to see what they do after this and see them fly. I didn’t want to cast myself and take an opportunity away from someone else.

Are you proud to present a series led by a 40-something woman of colour?

I feel quite emotional about it. When I was in the edit, I felt choked up just watching Parminder in pretty much every scene, remembering that I didn’t have this when I was little. I didn’t have that person to watch, I didn’t have that heroine. I had white women to look up to, which is fine, but I could have done with more people that looked like me on TV. I’m so excited for the future generations of kids coming up, who will be able to see themselves on the telly and see what they could be, I want to be part of that. I can’t believe it’s taken so long, I don’t think we’ve had it before enough in drama.

Rachita faces many instances of ‘everyday racism’ – was that something you were keen to explore?

Yes, I wanted to include those micro-aggressions. One of my inspirations is Issa Rae’s show Insecure, which deals with race in such a subtle way, and it’s about the things that we all experience every day. Sometimes it’s to do with gender, not just race – a lot of people experience everyday sexism, but we’re so used to it and just get on with it. Things like someone in a shop just assuming that you work there, which happens all the time to women of colour. If I stand still in a restaurant long enough, eventually someone will ask me about the specials!!!

When people watch the show, I hope they will be able to relate to this and connect with the layers. And hopefully some people will say, “Oh, I feel embarrassed, I’d never thought about that”.

Rachita’s heart sinks when she suspects she’s been given her promotion as a result of tokenism, is that something you’ve experienced?

I had to wrestle with this when I started getting invited into writers’ rooms. Sometimes I thought it was because they need a brown female in the room and I ticked a box for them. And then I told myself to get over it, get into the room and then prove why I should be there. But you then have to work harder to prove yourself.

Tell us more about the case that she’s investigating.

Well, Rachita has been hired to deal with things like honour killings, but we wanted to subvert that straight away – even though it’s easier for the team to believe this is an honour killing, all the pointers say that it’s not that kind of crime. I wanted her to investigate something beyond her and messier, more complex, so she’s dealing with more than just a homicide, it’s also organised crime, smuggling and sexual assault – I wanted to throw her in at the deep end.

Are you excited to see the show go out on TV?

Yes, it’s scary but I’ve lived with it for so long now that I want it out there! I might have a few friends round to hold my hand when it goes out on the telly because they have lived through it with me in the roughest times, or held my baby when I’ve been frantically trying to write, so we might have a little toast. I want to watch other people watching it. Unfortunately, my kids are too small to watch it and I don’t want to traumatise them, but they’re happy with my voiceover work because they can watch the cartoons and say, “That’s mummy’s voice!” They can watch DI Ray when they’re older…if they’re even interested – things move so fast!

Going forward, will you continue to focus on writing, or return to acting?

I’m still acting but writing is what I’m doing most of at the moment because I can be at home writing a lot and dealing with the kids. But also I can create parts through my writing that I never get to play as an actress. I’m bored of waiting for people to create parts for me. I want to give other actors the opportunities that I didn’t have, the parts I never got offered. And I want to give voices to people who aren’t really represented. We need to keep going and give breakthrough talent the chances to show what they can do.