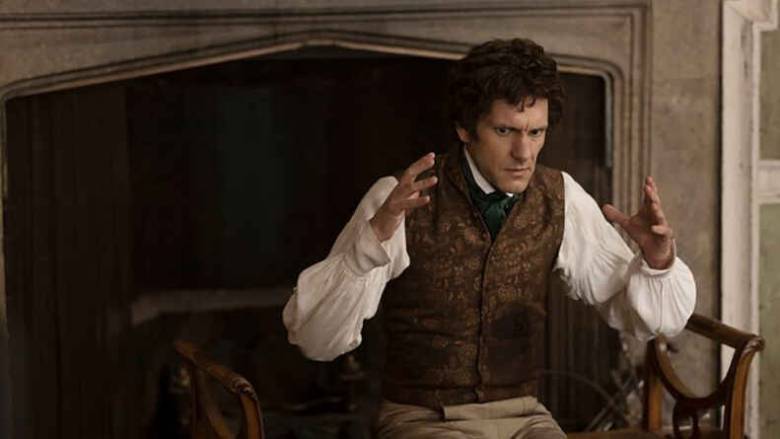 What major things happen to Thomas in this series?

At some point, Thomas has got to realise that he’s a bit of a pest. Since series one, I’ve been having conversations with Charlotte on set about, realistically, at what point does Alison just go, “Stop it now”? We felt like we’d come as far as we could without reaching that point. So now there is an episode in this series where that point comes. Thomas is confronted with the paradox of, “If you love someone and they’re telling you to stop pursuing them, the real test of that love is, can you stop doing it?” So, that is a question that we address in this series.

Do you think Ghosts has something important to say about unity in these divisive times?

Definitely. The show is about people being stuck together and having to get along. They have more of a sense that they don’t know if they do see eye to eye with their neighbours. So at the moment having a show that has a real sense of optimism is great.

Can you expand on that?

It shows that the things we have in common outweigh the things that divide us and that you can see the world entirely differently from your neighbours and nonetheless you can find a way to rub along. That is the show’s message. Although these characters are in constant conflict, ultimately comedy brings them towards resolution quite naturally. My hunch says that’s why Ghosts strikes a chord. It offers a little sense of hope that we can be more united than maybe we feel right now.

The show also underlines the positive contribution that comedy can make in hard times, doesn’t it?

Yes. I think comedy is always welcome, frankly. It’s enduring. I feel like all my life I’ve been reading articles about how comedy is about to die. They say sitcoms are dead, sketch shows are dead, and comedy is dead, and it never is. There are always people making funny things, and there will always be people who want to watch funny things.

It’s very moving when you examine the ghosts’ backstories, isn’t it?

Yes. They are such universal themes that you don’t really have to do much to tap into people’s own experiences of them. They are ghosts, so their mortality, their concept of death, their idea of legacy and being forgotten are really front and centre. Who remembers you? And what mattered in your life? We often find it takes the lightest of touches really just to allude to these things, and it resonates quite deeply with people.

Why do you think you have worked so well as a team for so long?

Why else does the ensemble function so successfully?

We pick each other up. If one person is down on things one day, that’s fine. Everyone else will keep the wheels turning. If two people are arguing, there’s four other people there to arbitrate. And when I say arguing, I mean over material. We can argue passionately about the most absurdly specific detail in a script. But to date, I don’t think that we’ve ever had an argument about anything apart from material. So the friendships are a bedrock that doesn’t change. I hope that ensures our longevity as a team. I think we all feel that we’ll work together as long as we can and as long as people pay us to do silly things.