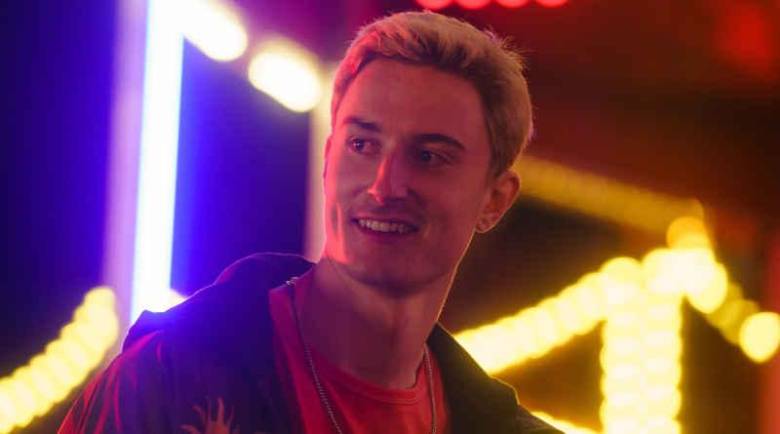 This is your first TV role. What training had you done before Tell Me Everything?

I was at the National Youth Theatre from the age of 14 which is actually how I heard about this role. On top of that I’ve just tried to learn as much as I can wherever I can. The best place for me I’ve found is the Manchester School of Acting, under Mark Hudson, which has helped hugely. Loveday Ingram, who is a brilliant director, has also mentored and helped me find my agent so I owe a lot to her. I had just started looking properly for jobs when this perfect opportunity came along. It was fate and because I’ve been training for a while, I felt I was ready to take this.

What scenes did you do for your self-tape?

It was Jonny describing Welwyn Garden City – what it was like, a bit about the people. This was one of the first scripts that I was really blown away by. It was so eloquently written and perfectly summed up so much.

How does it feel to be part of a brand-new ITV drama?

Surreal. I can’t even let myself think about that. It’s just about creating a piece that I’m proud of and I am very proud to be a part of this. Everyone is so talented and hardworking, and the environment was brilliant.

What did you first respond to about Jonny as a character?

Jonny’s story reminded me a lot of me in certain ways. As an actor you are always desperately trying to find bits of yourself in a character. I really clicked with him instantly. It’s like a fusion of me and Mark O’Sullivan. Jonny has this laddish-ness on the surface and then a vulnerability right under that. It’s great that we see both sides. In real life you sometimes only see one dimension of certain people, especially young men who learn to mask their feelings very well.

Where is Jonny in his life when we first meet him? He talks about being seen as “the boy with the dead dad.”

Jonny spirals throughout the show. Does he spiral because of the death of his dad? Or was it always inevitable? I think it’s impossible to know whether the death of his dad was a catalyst. Jonny is troubled and he finds it difficult to speak to people because he feels no one wants to listen. This means he ends up pushing a lot of people away

When Jonny talks more openly to his family later in the series isn’t there a sense that in some ways losing his dad allowed him to idealise him?

Definitely. He creates the perfect image of his dad. He’s always looked up to him and that’s probably the person he wants to be. So, it’s difficult to lose that person in your life in your developmental years. You are going to spend your whole life trying to be this idea of who they are. His dad was always the perfect role model to him.

Jonny has undiagnosed depression. How did you research that?

It was a combination of a lot of things; Mark the writers experience, research through charities like Mind, but also trying to be introspective of myself and how I’ve struggled. What I think Mark captures beautifully is how most people, but more typically young men, do it alone. It was important for him and I that the situation wasn’t romanticised or glamorised. That it was real. I think we just want to know that other people see us, and that they can somehow guess how we feel, because to us it’s unmissable. Except most of the time they can’t just see it, because even though to us it’s like we’re bleeding through our shirts, to other people we’re just like we are every other day. That’s something Jonny goes through in the show, and something I really connected with. I think so many people don’t speak up because they hope someone will just guess, but most people just don’t realise. That’s why I think it’s so important to tell someone, and it doesn’t have to be some long speech, it can be a text, a conversation, or outright saying it, but trust that people care, because they do.

How does Jonny feel about Neve and Louis?

They are his absolute best mates in the whole world. When he spirals, he is looking for someone to lash out at. Some teenagers often lay into their parents, but I don’t think Jonny really has that relationship with his mum and obviously he has just lost his dad. So, he’s looking for someone to lash out at that will take it and still be there for him. That’s difficult to put on a teenage kid who is a friend of yours, but they are the people he chooses. Louis and Neve have got their own problems, but they are the kind of friends that are going to understand whatever you might be going through.

What do you think initially attracts Jonny to Mei? Is it something you and Callina have discussed at length?

I think Jonny is looking for that buoy to keep him afloat. When Mei comes in and provides that, he idolises her and perhaps makes her into something that she isn’t necessarily. Before he even gets to know the person that she is he takes that leap. It was always a real discussion with Callina. We constantly had ideas and when we would discuss them it was a revelation every time, which was brilliant.

How was Jonny and Mei’s big scene on the church tower to film?

It was a difficult scene for me to film but a rewarding one so hopefully that comes across because it is the absolute height of Jonny’s mania in episode one. It is such a pinnacle moment. He is completely lost. He doesn’t know what his purpose is in life, and he finds that in Mei, for better or for worse. It was a great thing to film with Callina.

Do you use anything like music to prepare for emotional scenes to get yourself in the right headspace?

I love to spend time being social on set but when I have those important moments, I have to be introspective and a bit quiet and get myself in that zone. I think Matthew McConaughey said, ‘Be ready to receive’ and that’s an important thing.

How does Welwyn Garden City compare to Wrexham where you live?

I don’t think there’s anywhere like Welwyn Garden City. Wrexham is very different. Welwyn Garden City is a polished version. That’s what’s brilliant about it. It is the most polished place on this earth but underneath are these problems for these people. I really love Wrexham. It’s simpler in the North. People say what they mean.

Jonny has a complicated relationship with his older brother Andrew. How would you describe it?

Andrew is a difficult guy. Some people think he’s one thing and others think he is something completely different. That’s the beauty of certain characters that divide the audience. You don’t want everyone thinking the same thing. You want people to take something different from it. Me as Eden, I don’t think Andrew is too bad. I think he’s alright, just a bit of a goof, but Jonny hates him.

There are some interesting family scenes later in the story where you get to understand more where both brothers are coming from.

Mark has done a great job with that. Andrew is just a guy trying to fill the shoes of a man he didn’t really know. It says in the script that Andrew is a mummy’s boy and Jonny is a daddy’s boy. That’s always the way it’s been. So, for Jonny his dad is his absolute hero, and no one will fill his shoes. Andrew has got this idea in his head that his dad is gone, and he has now got to try to be the man of the house. That’s always going to cause conflict.

Who do you turn to if life gets difficult?

My mum. She’s my biggest supporter. I’m very lucky to have her in my life. She’s the reason that I have this drive. My dad is also great as he’s always able to be calm and logical which allows me to rationalise and put everything into perspective. I’m also very blessed to have a diverse friend group and family network where I can speak to different people about different things.

What do you think the family will make of the show?

I’m excited for them to see what I was doing all this time! Hopefully they’re proud, and hopefully they skip the sex scenes. They’ve always been very supportive and it’s great to be able to show them that it was worth it. They just know what I’ve told them about the show, that and a few pictures, so I’m looking forward to seeing their reactions, and I hope there’s something in it they can all get behind!

What have been the most fun scenes? Jonny, Neve and Louis have their own version of Ferris Bueller’s Day Off…

That’s the funniest bit by far. They went into this Polish grocery store, and we were told that we could improv it. Director Marley (Morrison) is great at capturing those moments. Spike and Lauryn are great improvisers, and I had a lot of fun doing it. There are also bike scenes, which were really fun in different ways. You’re just riding a bike but it’s pretty big because they shut down the road and you’ve got these little cars driving in front and behind you. It’s amazing. So, I think just me riding a bike is my favourite bit!

How did you celebrate your 18th on set?

I got a lovely ring from the crew. It’s beautiful. It was very, very considerate. They got me a little card. It was really nice to be around people like that and celebrate my birthday and then go home and celebrate it with my friends and family. You’ve got to milk it haven’t you?

Why do you think Tell Me Everything is an important show for now?

I think that portraying mental health accurately and responsibly and in a real-world situation is very important. Sometimes it can be told in these big, fanciful ways or glamourised and it’s not that. What Tell Me Everything does so well – and I think it helps because it’s British – is we really portray everyday life honestly. That’s what makes it more powerful. It’s so important for people who are going through similar situations to understand that other people are too and that it will get better. It’s also important for people who aren’t going through it to know that others are and to have a better understanding of the process and what to look out for.