John Huston’s sporting war-time thriller Escape To Victory opens in a German prison camp run by Major Karl von Steiner (Max von Sydow). The senior British officer is Captain John Colby (Michael Caine) and the pair share a passion for football: both were professional players before the war, Colby an international. Von Steiner proposes a match between the prisoners and the Germans and what was initially to be a low-key affair becomes a propagnda exercise, hijacked by Von Steiner’s superiors with Colby’s team facing the German national squad in Paris.

The fly in the ointment is renegade American prisoner Captain Robert Hatch (Sylvester Stallone). Attempting freelance escapes from the camp causes trouble for all the prisoners but he makes a successful break and ends up with the French resistance, who have a plan to spring the entire team from the stadium. Allowing himself to be re-captured, Hatch explains the plan and joins the team as the goalie. And so the big day approaches and the two teams face each other in front of a packed crowd of German troops and French fans.

Apart from Stallone and Caine, the rest of the team were pro players, including Pele, Osvaldo Ardiles, Bobby Moore, Kazimierz Deyna and Paul van Himst, supported by a smattering of the Ipswich team. It’s fair to say their acting ability matched Caine and Stallone’s football skills but there is enough off-field tension to keep the film moving along and if the ending is a little flagged (will they escape or return to the field to beat the thuggish Hun?), the tension between Colby and Hatch is nicely played. Rumour has it Stallone wanted to score the winning goal until the responsibility of the goalie’s position was explained to him and he had to settle with saving a crucial penalty, while the stadium, supposedly Stade Colombes in Paris, was also a fake, the MTK Stadium, Budapest standing in since it was similar to the grounds of the time and, most importantly, didn’t have floodlight pylons. 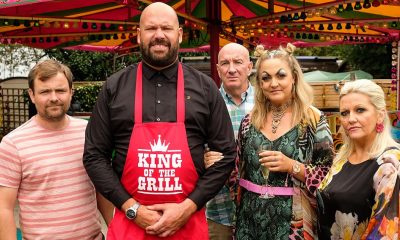 It's the morning after the night before – the epic Sten Do has taken its toll on Gary and Terri's...

Gary and Terri's wedding in Ireland is finally here. And with Kay in charge of planning, what could possibly go...

Gary and Terri have a huge row over the wedding plans and Terri goes ‘fully dark'. Meanwhile the Aaron situation...

Gary and Stuart go orienteering with their boys, up against nasty neighbour Aaron. Back in the Crescent, Big Gary is...

1987: It's farewell all round as The Tube ends and The Smiths split. Goth rock peaks with The Mission and...

The singer is in north Wales, exploring the beautiful Snowdonia mountain range, in a journey that takes in Caernarfon Castle...

Martin feels let down by his wife as Ruby tries to right her wrongs. It's Tiffany's graduation party and she...