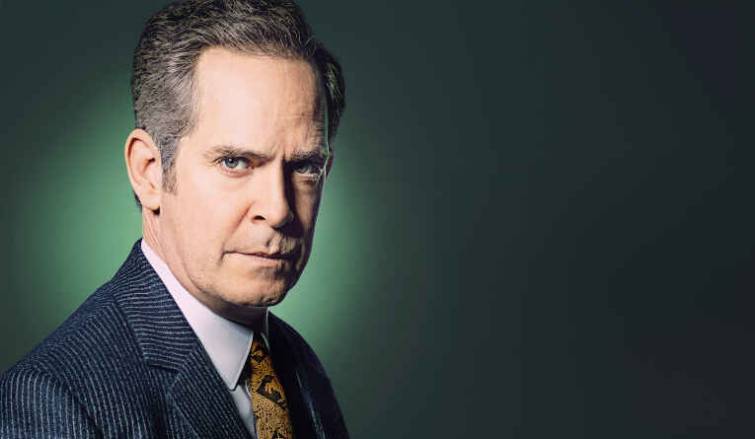 Q: What were your thoughts when you were first approached about playing Dalby?

“I read John Hodge’s scripts and thought how clever and sharp they were. What good quality writing it was. Unusually good. I think it’s his first TV script – as opposed to film – and I thought it was very assured. I enjoyed the part. I enjoyed the sparring between Dalby and Harry Palmer. That was good stuff.

“Then I met with John Hodge and the director James Watkins, and we had a really good chat about the character and his development. They were very clever. We had a good session and then they produced another set of scripts. It was a pretty straightforward ‘yes’ from me. It seemed like a great part, so it was a very easy process. There wasn’t much gnashing of teeth about getting involved in this and playing Dalby.

“The reason I wanted to do it was because of the wit. That was what made it easy to say yes to. We stuck to the scripts exactly. Often you read scripts and then you play around with it because you have a sense there is a better version. But with John Hodge’s scripts it’s so precise. He has really thought about each word before he’s written it down in the dialogue. The scripts for The Ipcress File are very classy.”

Q: Had you read the original Len Deighton novel or seen the 1965 Michael Caine film?

“I had seen the original Michael Caine film and I watched it again. I tried to read the book. I didn’t get that far with it.”

“Dalby is the boss of a spy agency in London which is independent from MI5. He has been around a bit and is slightly weathered. There is a cynicism to Dalby and a superiority in terms of condescension to MI5. Dalby has another life which emerges as the series goes on. He’s an interesting character with a military background, security services, Home Counties, upper-middle-class person of that time. But there is also something else going on. There are echoes of le Carré and the true story of the Cambridge Spies. It’s that time, the Cold War. Dalby is like a chess player who is always several moves ahead of everybody else.

“The story is also very interesting because the enemy is not the conventional enemy. It has a contemporary resonance. Even though it’s very much a 1960s period piece, there are some modern notions in there. The most startling and obvious being Lucy Boynton’s character Jean. In the 1965 film it was all about the men. In our adaptation Jean is a really magnificent character. Both of the period and of 2022 in a way that I think is really good.

“I know younger women will relate to and enjoy Jean. There are also other themes revealed as the story goes on which resonate with what is happening today.”

Q:What does Dalby see in Harry Palmer (Joe Cole) that leads him to arrange his release from a military prison?

“On one level it’s entirely cynical. Harry Palmer is perfect because he is connected, he knows the world Dalby is interested in. But also he’s entirely within his power because he has been convicted and is serving a sentence in a military prison. Dalby can control him. Had he not been court-martialled I think Harry Palmer would be a more dangerous figure. As it is, Dalby can send him back to prison at any moment. That allows him to play with a rather dangerous animal.

“Dalby thinks Palmer is very sharp but is also a bit delinquent. He wants to harness that energy. He thinks Harry Palmer is a talented, clever chap. He tells him he is good. But in that class-ridden age I do think Dalby is a snob. He is using an army Corporal with criminal tendencies. But Palmer is also very sharp and knows the people Dalby wants to contact.

“Later on in the story there is a slightly paternal thing in a very repressed English way. The fun of this is because it’s set in this period, you are allowed to play an old-fashioned set of English behaviours which are no longer in fashion. But you can play them in a 1960s thriller because it’s authentic. That’s the fun of being an actor. You can escape into other worlds. It’s a bit like going on holiday sometimes.

“There is a mutual respect between Harry Palmer and Dalby. Palmer is in an absurd world and Dalby is slightly jaded because of his emotional life which emerges as the story goes on. That made it a whole lot more interesting than just playing the man behind a desk. Which is what Dalby appears to be at first. But this story allows Dalby to have a whole other life, a whole other dimension. It is beautifully written and with such economy.”

Q: One of Dalby’s secret agents is Jean (Lucy Boynton). How does he view her?

“Dalby trusts Jean to do her job. At one stage Harry Palmer questions her and Dalby slaps him down. Basically saying, don’t worry about her, she knows exactly what she is doing.

“It’s very good. Those are the moments where I think John Hodge allows a contemporary audience, that wants to see those power relationships between men and women reframed, to enjoy it. At that point Dalby is gender blind. He wants good spies. He might well be sexist in a different context. But when it comes to work it’s whoever’s best. And Jean is obviously brilliant. As well as being very stylish.

“Lucy Boynton gives a brilliant performance. As does the entire cast, including Joshua James as Chico and Anastasia Hille as Alice. They are all superb actors. Anastasia and I felt like we were the elder statesmen. It creeps up on you. When you look around and you’re playing the old bloke. There are some great performances throughout the series. It’s a complete emotional journey. I would say that John Hodge writes for women very well. But probably best to ask a woman just to corroborate. I thought that was very strong writing.”

Q: : What did the director James Watkins bring to The Ipcress File?

“James was unbelievably good. He thinks like a writer and was incredibly well prepared. He had thought everything through and directed every single scene across a long shoot. James carried the whole thing on his shoulders. He is a very thoughtful, nurturing director. Quite a gentle presence but a very concentrated, serious one. This is James Watkins’ – and John Hodge’s – achievement. We were lucky to be cast in it. But James did all of the real work in every element of it.”

Q: What was it like wearing Dalby’s stylish 1960s suits?

“The sixties tailoring is fabulous. I visited Mason & Sons at 34 Montagu Square, where John Lennon once lived. That was amazing. Henry Rose, the tailor who made our clothes, still makes suits for Paul McCartney. Later we had to do fittings by Zoom which was quite difficult.

“The costumes really help you get into character. The shoes make you walk differently. You hold yourself differently. People weren’t going to the gym in those days. Their shape was created by their tailoring.”

Q: What about the locations and sets?

“Filming The Ipcress File was like being in a time machine. Which is true for any period drama. Except this was in the middle of the pandemic and so the fictional world was so much more alive than the real world.

“We were filming in a deserted Liverpool, which doubles for London. A Liverpool which I hardly know but I can see is the most vibrant, lively city. Liverpool is all about people and the energy on the streets. But there was no one on the streets because of the lockdown. Yet in our fictional world it was fully live action, obviously with all of our Covid protocols in place. It felt like we escaped one of the worst phases of the big lockdown. If people in the film and television industry have been working in this period, they have been incredibly lucky.

“Again, the credit for the international sweep of locations we filmed in Croatia goes to our director James Watkins. He had already worked there for McMafia and knew you could use Croatia for a really broad sweep of different places. This story goes from Berlin to Beirut to an island in the Pacific and so on.

“As an experience, filming in Croatia was wonderful. Firstly, wonderful to be filming at all in lockdown and a great privilege to be abroad. Also, to learn about a new country which I’d not been to before which has a fascinating history. I found Croatia very intriguing. Once part of the Austro-Hungarian Empire with those Hapsburgian buildings. And an Italianate Mediterranean feel and a Slavic feel. Plus, the residue of recent communist history and the civil war in Yugoslavia. The guy who drove me, who was about my age, his body was still filled with shrapnel from the war of independence in the 1990s. The men that fought that war are now in their 50s.

“I love the sixties and wish I’d been about 17 in 1967 when I was born. It was an explosion of energy, colour and style after the formality of the drab fifties and the austerity and poverty after the Second World War. Suddenly there was all of this music which we’re still in love with today. It’s that and it’s Mary Quant and so on. But this story is set in 1963, just on the cusp before what people know as the sixties.

“We probably romanticise it. I gather the sixties weren’t really happening for very many people at all, not in the way we think they were. The Austin Powers’ sixties. It was happening to about 35 people on the King’s Road in Chelsea who were all incredibly privileged or in the right industry. Everyone else was still in the fifties until the seventies, probably. And then the sixties became lived by everyone else.

“If you look at Peter Jackson’s Beatles’ documentary series Get Back you can see how life on the street is still very formal. The Beatles are really quite wild. The people walking on the street past Apple Records are all huddled in their dark coats, going to work. It’s very old fashioned.

“Our contemporary life has become so difficult. The sixties was a time of hope and optimism and opening up. Fun being had. Fun being democratised.”

Q: How do you reflect back on this role and being a part of The Ipcress File?

“Even if nobody watched it at all, this was still an extremely enjoyable job. I loved working with James Watkins and the rest of the team. I do wish it well.”