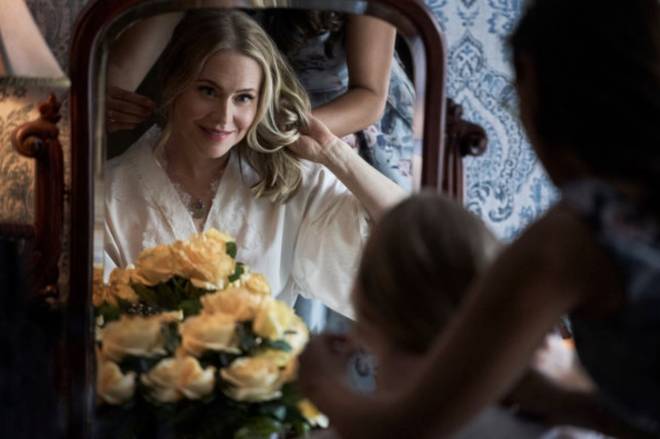 During the eight years since they first met, Shane (Booth) and Oliver (Mabius) have shown us that opposites not only attract but can make a difference in the world, as they’ve joined forces together with Rita (Lowe) and Norman (Gustafson) to form the POstables, a special unit of the Dead Letter Office (DLO) committed to solving mysteries behind lost letters. As the Head of the DLO and a gentleman with old world values, Oliver has always searched prayerfully for the letters that can change a life when delivered. But this time, the life that’s transformed is his own. He’s dealing with more than pre-nuptial jitters when he recalls words of wisdom from the great women in his life, including Supervisor Theresa Capodiamonte (Valerie Harper); his Sunday School teacher Marion (Marion Ross) and Norman’s grandmother Ardis (Carol Burnett), who give him courage yet again.

As the wedding day approaches, the team works quickly to solve the mystery behind an urgent letter from a young boy fighting leukemia. Shane has her own challenges when her mother Sharon (Sherry Miller, “Schitt’s Creek”) arrives early, while Rita and Norman consider starting a family, and a new employee may deliver the answer.

“Signed, Sealed, Delivered” is a comedic drama franchise that follows the lives of postal workers who transform themselves into an untraditional team of detectives to track down intended recipients of undeliverable mail. Their missions take them out of the office into an unpredictable world where redirected letters and packages can save lives, solve crimes, reunite old loves and change futures by arriving late but somehow on time.