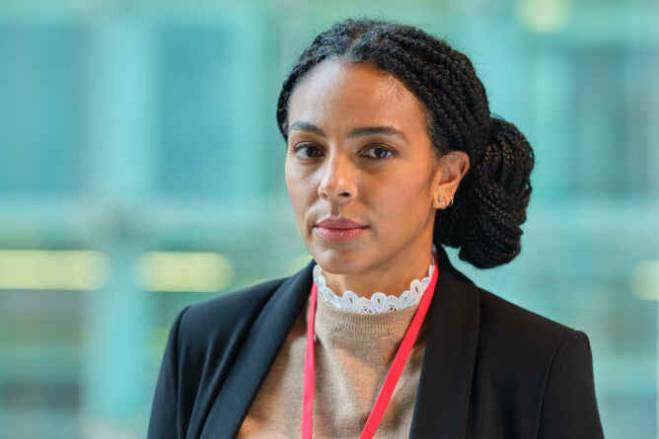 Who is Francine, and where do we find her at the start of Series two?

She has quit working with the PM and Anna Marshall, and she’s a free agent – until she runs for office in a byelection to be a Labour MP for Kent. She was never going to leave politics completely; she’s too drawn to it. She lives and breathes it.

Does she hold a grudge against Anna and Robert?

100% There are a lot of hard feelings and they haven’t reconciled at all. Anna and Francine have been friends a long time and managed to navigate their very different views on the world. The blow-up they had in Series one is the first they’ve had on that scale, so they’re not in each other’s lives by Series two. That may change, though…

How would you describe those differences?

Pretty basic – Francine is a liberal, Anna is not. Anna’s life is very different to Francine’s, because she has had an immense amount of privilege and Francine hasn’t. It’s not good vs evil, because Anna’s a good person, but it’s definitely complicated.

Is it a relief for Francine to no longer have to push through policies she doesn’t agree with?

Absolutely. I honestly don’t know how Francine ever thought it was going to work because she disagrees so vehemently with those people!

What has Francine learnt from the events of the first series?

More than anything, she realises she has to stick to her guns and value her principles – she can’t be swayed. You really see that in Series two, she’s determined.

What about her personal life? She got very close to Fraser Walker in Series one…

That’s all in the past now. Her personal life isn’t really a part of it, this series is about her professional life and I’m happy about that, because ultimately it’s a show about professional people.

How does she get involved in the national crisis we see in Series two?

She doesn’t get fully embroiled, although she ends up working with a podcaster who is exposing all sorts of bad stuff. Her main involvement is in the byelection, where her opposition is this incendiary racist Conservative. He sets the dogs on her, so she’s dealing with rape threats and death threats.

What particularly grabbed you about Ben Richards’ scripts for Series two?

I had some great conversations with Ben, prior to this series, about really seeing the power of Francine Bridge this time. Series one set her up as a powerhouse character, and we see more of that here, really compelling scenes of her being a politician with the Labour leader, played by Andrew Buchan. And cyber-attacks used to sound like something from a Ridley Scott film, but they’re something we should all worry about. We’ve seen it with Russian interference in elections – it’s scary stuff.

Has making COBRA: CYBERWAR helped you get to grips with the decisions the real-life government has had to make?

I’m always critical, I always think governments can do better. But I empathise with the very difficult decisions they have to make, the ones where you’re damned if you do and damned if you don’t. Having said that, it’s what they signed up for!

What has it been like working on such a large production during the pandemic?

I was nervous going in, but we all toed the line and they took such good care of us. Everyone trusted each other, the protocols were hardcore and we got tested two times a week. We were all just grateful to be going back to work.

What’s been the best thing about working on this series?

The cast are magnificent, so stellar but so nice and fun. One of my first jobs was working with Bobby Carlyle on Antonia Bird’s Face. That was a very defining moment for me, because I’d been doing kids’ stuff up until then. Working on that turned my head and defined the kind of actor I wanted to be, realising we could tell all these wonderful stories, so working with Bobby again was a delight. Victoria is one of the best actors I’ve ever worked with, sitting opposite her just a masterclass. And the world Ben has created, it feels like a very high calibre of work.