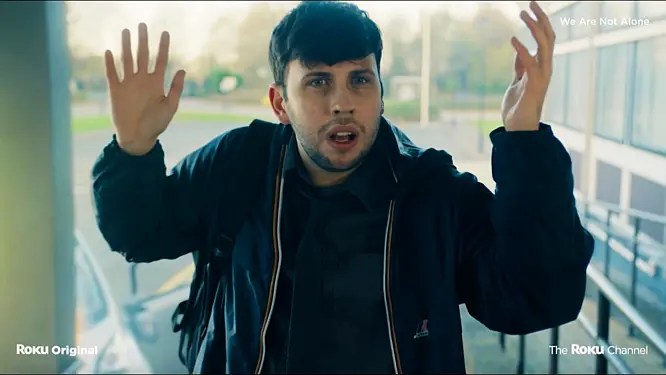 Written by Laurence Rickard and Ben Willbond (co-creators and stars of “Ghosts”), the comedy starts with an alien invasion by The Gu’un aliens who fully conquer everything within six weeks. We Are Not Alone delves into the gulf of understanding that exists between Earth’s natives and their new overlords, who are trying to make sense of a planet where people can’t even agree on which side of the road to drive on.

The film was commissioned by UKTV and first premiered on its award-winning entertainment channel, Dave, in the U.K. on November 28, 2022. The Roku Channel will exclusively bring the sci-fi comedy to American audiences as a Roku Original.

Colin Davis, Head of Scripted Originals, Roku: “It has become increasingly clear that comedy has no borders, and ‘We Are Not Alone’ is truly out-of-this-world. We are excited to bring this hilarious show from world class creators and producers to the U.S. audiences on The Roku Channel.”

Kelly Miller, SVP, global partnerships, BBC Studios: “BBC Studios is a leader in bringing fresh scripted projects stateside to an audience hungry for our brand of British comedy. ‘We Are Not Alone’ is BBC Studios’ first co-production deal with an AVOD and our first deal with The Roku Channel for an original series, leaning into our approach to meet customers on emerging platforms where there is a growing demand for content.”