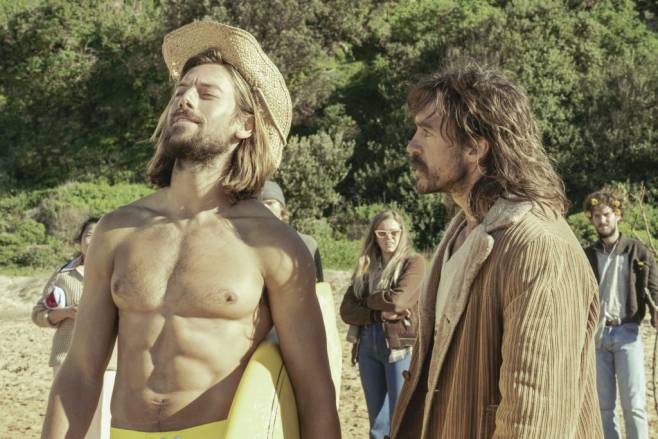 The exciting, eight-part drama series Barons, set in 1971, at a time of sexual liberty and social transformation, shows a unique moment of upheaval and possibility as a new surfing counterculture and the spirit of enterprise merge.

Snapper Webster (Ben O’Toole) is the owner of the Bare Feet Surf Co, a budding company that makes bespoke wetsuits for surfers. Trotter Dwyer (Sean Keenan), Snapper’s right-hand man and best friend, has higher ambitions. Trotter produces a brand of board shorts developed by surfers, specifically for surfers, with the support of his fiancée Tracy (Jillian Nguyen), who also happens to be Snapper’s ex-girlfriend.

However, Trotter’s dream enterprise has a significant impact on their close circle of friends, including surfboard shaper Reg Thompson (Hunter Page-Lochard) and tomboy surfer Dani Kirk (Sophia Forrest), who both seek to make their own mark in different ways.

While their American friends, surfing legend Buddy Fraser (Lincoln Younes) and affluent kid Bernie Hunter Jnr (George Pullar), recognise the possibilities of establishing Lightwave in the United States, Snapper, on the other hand, is reeling from what he deems the ultimate betrayal.

The stage is set for a vicious battle that will put friendships to the test and divide loyalties as these surfing barons grow their empires, become entangled in love, sex, and partying, and make decisions that will shape history forever. .

Barons tells the story of a surf-crazed group of hippy friends who turn their backs on the world in search of their ideal patch of surfing paradise. Little do they know that their desire for ultimate freedom and the perfect wave will take them from the beach to the boardroom, creating billion-dollar empires. But in selling their surfing dream to the world, these best friends will become fierce rivals and the question for this found family is – once you sell paradise can you ever get it back again? Set in the 1970s hedonistic world of surfing and the cutthroat culture of entrepreneurship, Barons sense of adventure, fun and infinite possibilities, will appeal to both young and young at heart audiences.