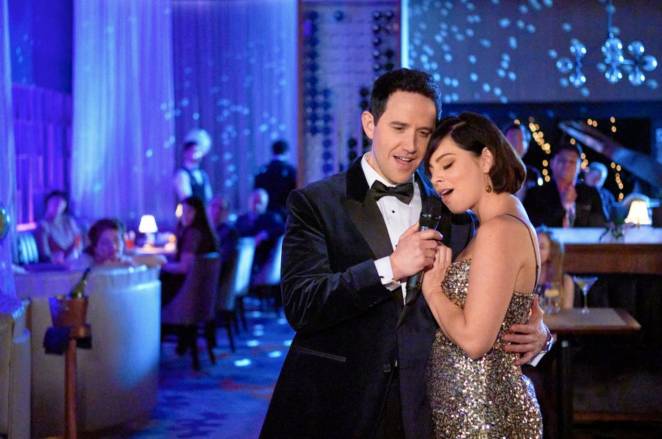 Mia (Rodriguez) is a college literature professor starting a new chapter with her 11-yearold daughter Rosie (Ava Grace Cooper, “When Calls the Heart”) as her marriage is coming to an end. Tony (Fontana), a happy bachelor, is a popular headliner in a Manhattan supper club whose smooth renditions of timeless standards have gained him loyal fans.

One day, Mia’s mother Marlene (Douglas) and Tony’s mother Sofia (Turturro) witness their daughter and son’s chance encounter at a showing of a classic, black-and-white movie at the local theater and start to hatch a plan. The matriarchs decide to join forces for a little matchmaking, even cleverly orchestrating Mia’s move into an apartment in Tony’s building so they can continue to run into each other.

Rosie bonds with Tony’s niece Isabella (Alice Rose, “Eight Gifts of Hanukkah”) and as the four of them spend time together, Mia and Tony grow close. Complicating matters are Mia’s soon-to-be ex-husband, who isn’t ready to exit just yet. Each of them is still recovering from past heartbreak, but it could be that just one kiss will lead them down the path to happily ever after.

Broadway veterans Rodriguez and Fontana lend their vocal talents to the movie with duets of classic songs “Fly Me to the Moon” and “Something Stupid,” while Fontana croons “It Had to be You,” “Someone to Watch Over Me,” “New York, New York,” “You Make Me Feel So Young” and Rodriguez performs “Over the Moon.” “Just One Kiss” is from Crown Media Productions, LLC. Joey Plager is executive producer.